But as new coronavirus infections rise in the U.S., Americans are starting to panic buy.

The first to go were the face masks… Then the hand sanitizer disappeared… Now the panic has spread to toilet paper.

CNN reports that U.S. retailers are responding by limiting the numbers of toilet paper packs shoppers can buy in one trip.

In Australia, stores have taken the extra step of dispatching security guards to watch over the toilet paper aisles.

A journalist at The Sydney Morning Herald reported that one store there is “going through a pallet every ten minutes or so.”

Nor am I saying the spread of the coronavirus isn’t serious.

The chart below uses data from Bloomberg. It shows that confirmed cases are growing exponentially. In other words, they’re doubling and then doubling again… and again. 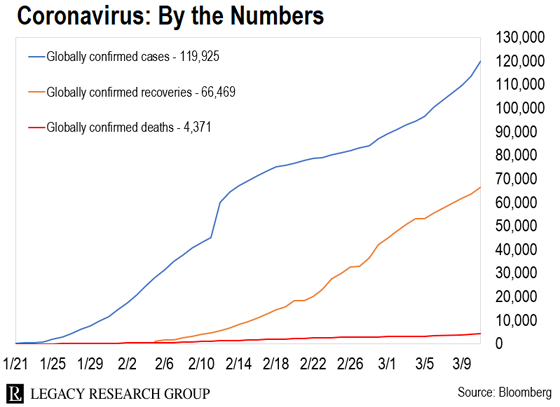 And according to folks who spend their lives studying the spread of viruses like this one, it’s just starting to hit its stride.

But as I and my colleagues here at Legacy Research have been hammering on, the worst thing you can do right now is join the crowd and panic.

In the retail world, it’s showing up as a panic over toilet paper…

In the financial world, it’s showing up as a panic over stocks, oil, and other assets that thrive in an economic expansion.

But it’s really the same phenomenon.

We’re social animals. We find it hard not to join the crowd. And the louder the stampede, the harder it is for us to resist.

When folks see toilet paper disappearing from the shelves of their local store, they become afraid – even if we weren’t afraid before. Then they hop on the queue to load up on some extra rolls.

The same goes for the stock market.

When we see other investors unloading their stocks, we become afraid – even if we weren’t particularly fearful before. And the temptation is to panic sell out of our positions.

Selling triggers more selling. That’s how all stock panics – from the 1929 crash, to the dot-com bust, to the 2008 crisis – build up steam.

The panic starts off small. Then it spreads.

That’s why perspective is so important right now…

It’s our mission at the Cut to bring you the best ideas from Doug Casey, Bill Bonner, Teeka Tiwari, Jeff Brown, E.B. Tucker… and the rest of the Legacy Research team.

And one of the most important ideas to grasp right now is the difference between a temporary setback in stocks… and the onset of a bear market.

As Teeka has been telling our Palm Beach Letter readers, the panic over the virus will do some short-term damage. But he’s convinced the bull market has a long way to run. Teeka…

We’re in a long-term (secular) bull market. Within each secular market, there are short-term moves in the opposite direction of the main trend.

Stocks can move up, down, or sideways for extended periods. But they don’t go straight up or down.

So don’t confuse what could be a temporary, sharp, panic-inducing drop with an end to the larger overall bull market. Remember, in the last secular bull market of 1982-2000, we saw three drops of nearly 20% or more. And yet, within nine months, the market was back at new all-time highs each time.

It’s all in the table below they showed readers of our Palm Beach Daily e-letter today.

Grant Wasylik is Teeka’s chief analyst at The Palm Beach Letter. Here he is with more on what it all means…

As you can see, after each of these 10 previous pullbacks, stocks rebounded each time. Except for the 1987 Black Monday crash and the 2008 financial crisis, stocks recovered in less than 90 days.

The last long-term bull market lasted between 1982 to 2000. Over that time, the S&P 500 went up 1,391%. To get those gains, investors had to endure three plunges of nearly 20% or more. But within nine months, the market was back at new all-time highs.

So although stock drops over coronavirus panic seem new, we’ve seen this movie before.

If history is judge… it’s not a reason to panic sell your stocks. The best thing you could have done in each of these past plunges was to sit tight and ride out bad news.

As I’ve been showing you, everything Teeka does at our Palm Beach Letter advisory revolves around a core asset allocation model. 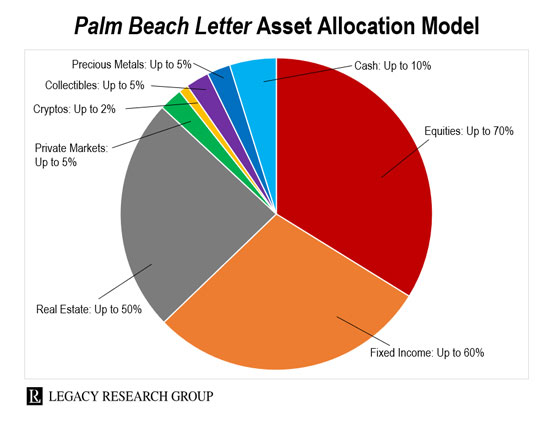 As you can see, Teeka recommends his readers limit their exposure to the stock market to a maximum of 70% of their portfolios.

And that’s only for the most aggressive of his readers. Most folks will have a lot less than that. (That’s why the suggested allocations don’t add up to 100% – every investor is different. Exactly how you split your wealth is up to you.)

They’ll also have plenty of defensive investments in there, too… such as cash, gold, real estate, and bonds. 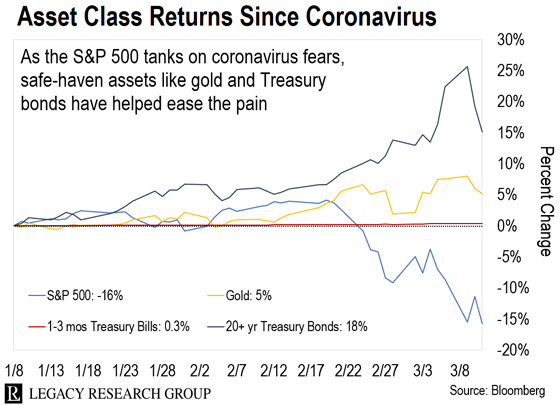 That’s what allows you to sleep easy when stocks are plunging like they have been lately. (Since its peak on February 19, the S&P 500 is down 18%.)

And it’ll allow you to take advantage of buying opportunities…

As Teeka noted above… this pullback will be temporary.

And you can’t take advantage and buy when quality stocks go on sale unless you have cash on board… and you aren’t in a panic like most investors.

Just because you follow a sensible asset allocation plan doesn’t mean you have to give up on your quest for life-changing gains.

You’ll notice from the asset allocation model above that Teeka recommends his readers put as much as 2% of their wealth in cryptos and up to 5% of their wealth into private markets (tiny stocks that still haven’t listed on a public exchange).

But he knows that, to make a fortune without a fortune to invest, you need to focus on “asymmetric bets”… trades where the potential upside is much higher than the potential downside.

For instance, in 2016, Teeka knew in his guts that cryptos were exactly that kind of fortune-making opportunity.

Not all these bets will be winners…

There’ll be losers, too.

But remember, these bets are asymmetric. In some cases, you have to put only a couple hundred bucks at risk for huge payoffs.

In fact, Teeka’s been pounding the table lately on how you can put just a couple hundred dollars into certain tiny cryptos and potentially make millions.

I’m running out of time today to go into all the details. But if you’re interested in learning more about the asymmetric bets Teeka has identified, he’s holding a special educational event all about it next Wednesday, March 18, at 8 p.m. ET.

P.S. I’m writing to you from the lobby of the Hotel Casa Bonay in Barcelona, Spain. The coronavirus has landed here in Spain. It’s infected 2,231 people here. And it’s killed 54.

So far, life in the city continues mostly as normal. The cafes and restaurants are a little emptier than usual. The government has canceled major soccer matches. Some schools are closed.

But people are starting to get worried about the impact on the economy. About 18% of the city’s revenues come from tourism. If people stop coming, it will ruin the economy.

It’s not just Barcelona. Seventy percent of the U.S. economy is consumer spending. And much of that spending happens in malls… restaurants… cinemas… and downtown areas… which may close down due to the virus. More on what that means for the economy in future updates.