Gold has been taking it on the chin…

Our favorite precious metal peaked for the year at $1,557 an ounce on September 4.

Since then, it’s been steadily falling.

And as you’ll see below, even lower prices are on their way.

Don’t let that scare you, though…

The downturn will be short-lived. And it will mean better buying opportunities for you ahead.

And as regular readers know, he’s a charts guy.

Jeff doesn’t care if he’s looking at the chart of a stock, or a bond, or a commodity… or even bitcoin… It’s all the same to him.

He’s on the hunt for specific chart patterns that occur no matter what particular corner of the market you’re looking at. These give him insight on where prices are headed.

And a key chart pattern he watches just signaled more bad news for gold bugs… But only in the short term.

Jeff is long-term bullish on gold…

As he’s been telling his readers…

The long-term case for owning gold is still as bullish as ever. Gold is in a long-term bull market.

But over the short term, gold’s price chart is telling Jeff that there’s more downside ahead.

You see, the price of gold just fell below a key trend line.

It’s called the 50-day moving average (MA) (blue line on the chart below). And it helps Jeff determine which way an asset’s prices are headed over the next several weeks or months. 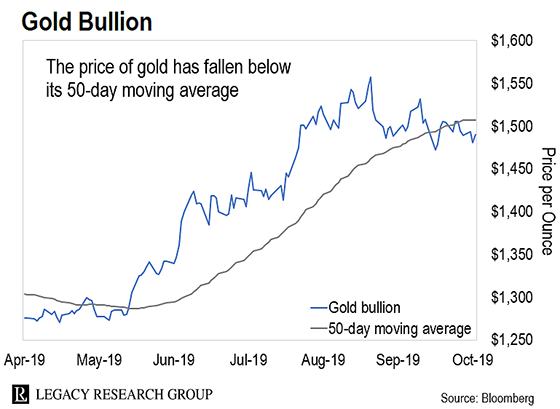 Here’s Jeff on what it means…

At the end of September, gold fell below the support of its 50-day MA line. This is a bearish development. It often leads to several weeks of downtrending action.

Many times, though, when an asset has broken below its 50-day MA, it will come back up and test that former support line as resistance. Then, it will start a more significant decline.

That’s exactly what happened with gold. It broke below its 50-day MA a couple of weeks ago. Then, it bounced back up to test the line as resistance. Resistance held. But on Friday, gold turned lower – which looks to me like the start of a new decline phase.

And as you saw in Monday’s Daily Cut on bitcoin… Jeff’s analysis has a history of putting readers on the right side of major moves in a range of different markets.

That doesn’t mean the gold rally is toast…

Even after the recent pullback, gold is up 16% this year.

And as we’ve been showing you, we expect gold to shoot past its all-time high of $1,900 an ounce before this gold bull market is over.

But as I said up top, there’ll be better buying opportunities in the weeks ahead. 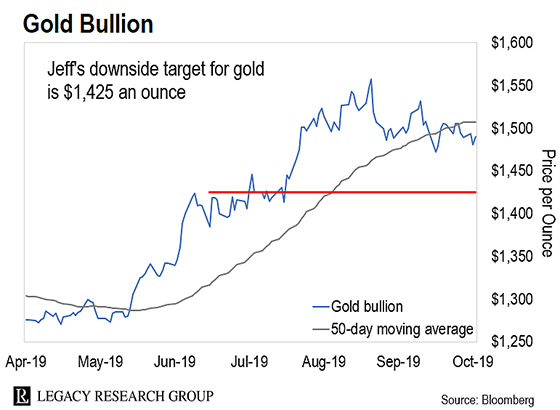 I’ve made it clear to my readers that I’m still as bullish on gold over the long term as ever.

The fall I see coming is a correction in that bullish phase. So, any sharp decline from here will be a chance for investors to increase their exposure to gold.

The most obvious support level is down around $1,425 an ounce. That looks like a good place to start buying.

If you’re adding to your gold position, consider buying again at around $1,425 an ounce. As Jeff says, gold is in a long-term bull market. So that marks a good entry point.

If you already own gold, this is not something you need to think about. The best holding period for gold is forever. The dips and bounces along the way are relevant only when you’re buying or selling.

Yesterday, he handed his Delta Report readers a 50% win. And what’s even more impressive… they were in the trade for less than a week.

That’s the kind of return Jeff’s readers are accustomed to.

As we’ve shown this week, Jeff has recommended 209 trades since we launched his Delta Report advisory in January 2017. And 162 of them have been winners. That’s a 78% win rate… or an average of one winning trade every six days.

Of course, these were options trades. Options can be complicated to learn… and they’re not for everyone.

But if you’re missing out because you think Jeff trades only options… you don’t have to sit on the sidelines anymore.

Next week, Jeff will launch his first-ever stock-trading advisory. It’s based around his “S-Force Method”… a system that spots massive imminent moves in a specific group of stocks. Click here for details.