What’s the difference between being rich and being wealthy?

Last night, I listened to an interview with financial writer Morgan Housel.

He’s a partner at an investment firm called Collaborative Fund. He also wrote the bestselling book on investing, The Psychology of Money.

In the interview, he made an important distinction between the rich and the wealthy…

You can see when someone is rich. They work a high-status job. They have big houses, luxury cars, and flashy jewelry. They go on fancy vacations.

Wealth is different. It’s not money someone has spent. It’s money they’ve saved and invested.

This gives the wealthy what the rich don’t have – independence and autonomy.

The wealthy don’t have to work if they don’t want to.

Instead, their investments work on their behalf.

And you don’t need to have been born with a silver spoon in your mouth to grow your wealth like this.

As you’ll see today, there’s a simple plan you can follow to virtually guarantee you’ll succeed.

Where do the wealthy invest?

A popular choice is to buy and rent out properties. They could be commercial buildings or family homes.

These generate income. And if you have a company managing the properties, it’s not a lot of work.

Another option is to buy a private business.

Buffett doesn’t have to write insurance policies… come up with new marketing strategies for batteries… or think of new fast-food items.

These businesses work on his behalf while he does other things. And he’s now worth about $100 billion. That makes him the fifth-wealthiest person in the world.

But by far the easiest route to wealth – and the one that’s most accessible to folks who aren’t already wealthy – is to buy shares in a publicly listed company.

You’ll still have an entire business working on your behalf like Buffett does. But you can arrange it with a click of your mouse through your regular brokerage account.

As we explored in these pages last week, colleague and former hedge fund manager Teeka Tiwari just put out a new portfolio plan.

It’s perfectly suited to help you grow your wealth in today’s inflationary world.

And it includes a 50% allocation to stocks.

As Teeka put it, that’s because stocks are easily accessible to investors. And they’re one of the best wealth-generating asset classes over time.

Here’s a chart he showed his readers to illustrate the point. 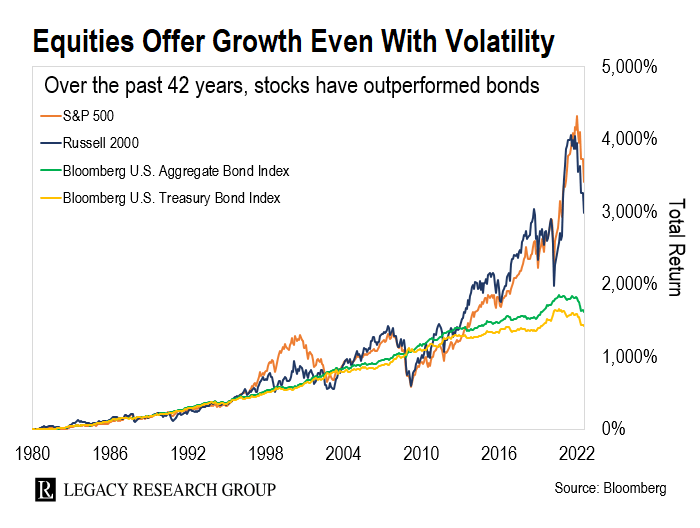 It shows the returns for the large-cap S&P 500 (orange line) and small-cap Russell 2000 (blue line). It plots them against the returns of two popular bond indexes (green and yellow lines).

Since 1980, stocks have delivered a total return of more than 3,000%. That’s roughly double the return for bonds over the same time.

But the path to those massive returns was volatile…

You can see that clearly on the chart above.

The blue and orange lines representing stocks look a lot like a roller coaster.

The green and yellow lines representing bonds are a lot smoother.

That’s why Teeka calls volatility the price you pay for the chance at outsized returns.

So if you’re investing over 50 years, you’ll encounter an average of 14 bear markets along the way.

This volatility is painful. But riding it out is your best chance at the life-changing gains I mentioned.

I know 2022 has sucked for most investors…

And I’m not trying to downplay that.

The kind of pummeling we’ve endured so far in 2022 hurts… no matter how long you’ve been in the markets.

Recommendations across the model portfolios we publish at Legacy Research haven’t been spared.

But as Teeka keeps reminding his readers, the worst thing you can do now is panic sell.

Instead, he urges you to take advantage of steep discounts. Over to Teeka…

I’ve seen so much volatility over the years, it doesn’t faze me anymore. I know bear markets are inevitable. I also know stocks eventually rebound and go on to new highs. So I deal with volatility by buying quality assets at discounts and then getting on with the rest of my life.

I realize not everyone thinks that way. And when they’re afraid, people make horrible mistakes. They sell at the bottom and buy back when prices have shot way up.

But as I’ve written to my readers many times in the last few months, you must hold your quality assets and leave them alone.

That’s where the simple plan I mentioned up top comes in.

Instead of trying to time the market, you invest a fixed dollar amount from your paycheck into the stock market every month.

If you have a 401(k), you’re already adding to your investments – and your wealth – with each paycheck. But you can do this outside of your 401(k), too.

This gives you two strengths as an investor.

First, it shields you from buying too much near the top and risking a ruinous loss.

Second, it forces you to keep buying through every bear market.

There’s another way you can turn crisis into opportunity…

It has to do with something Teeka calls an “Anomaly Window.”

It’s a period when the rules of making money change.

During it, you can make crypto-like gains from ordinary, safe blue-chip stocks.

It’s down to a strategy mostly reserved for the ultra-wealthy. But Teeka has figured out a way regular investors can get involved.

And it’s suited to today’s markets. That’s because the income it pays out goes up as volatility rises.

I promised Teeka and his team I wouldn’t steal his thunder. He’s going live with all the details on Wednesday, July 20, at 8 p.m. ET.

So secure your spot to hear from Teeka directly then. He’ll even give attendees a free list of stocks he’s using to profit from this Anomaly Window.