Yesterday, we looked into the abyss…

That’s how Legacy Research reader Margaret B. described how she felt about today’s market.

The tech-heavy Nasdaq is now down 18% from its all-time high last November.

Crypto has also been in a slump. So has another of our favorite sectors, biotech.

Yesterday, I began showing you why the best strategy for Margaret and other worried readers centers on two bedrock principles…

First, you need to prioritize spending time in the markets over trying to trade in and out of them.

As colleague Teeka Tiwari puts it, the best way to make a fortune if you don’t already have fortune to invest is to get in on a market megatrend early on… and stick with it.

Of course, when those around you are panicking, it’s hard to keep calm and stay rational.

That’s where our second bedrock principle comes in. As well as always keeping the long-term prize in mind, you need to stay diversified.

So today, we’ll look at what diversification is… why it’s so important… and why the mainstream version is dangerous for your wealth.

Diversification is a simple concept…

The more asset classes you spread your money over, the less one event – such as a crash in a sector – can hurt you.

That’s why professional investors and high-net-worth individuals spend so much time obsessing about “asset allocation.”

It’s the process of deciding which kinds of assets to own… and how much to invest in each asset class.

It’s not the most exciting topic. But it’s crucial you pay attention to it.

Studies show that asset allocation decisions account for more than 90% of the variation between portfolios’ long-term returns.

Teeka calls asset allocation the key to his success…

Take his track record at our Palm Beach Letter advisory.

His mission there is to help subscribers spread out their investments so they can grow their wealth safely over time.

And he’s delivered on that… and then some.

Since he took over at The Palm Beach Letter in 2016, the model portfolio has posted an average annual return of 33%.

That means you would have done more than two times better with Teeka’s diversified approach.

Not all asset allocation models are the same…

The mainstream version is a 60/40 split between stocks and bonds. 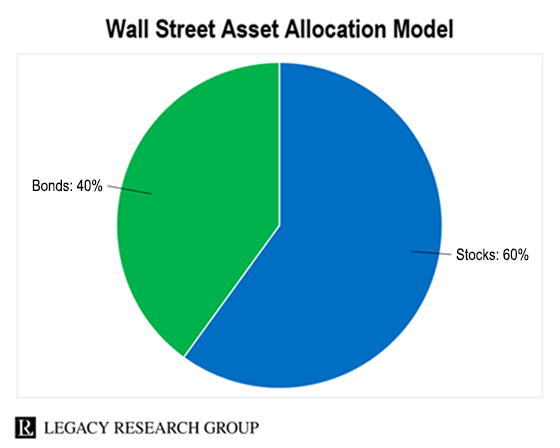 But as Teeka has been spreading the word on, that model is outdated…

Stocks and bonds are not the only assets out there. They’re just the ones most Wall Street people understand. And the ones they get paid to promote.

So stocks versus bonds is a misleading choice. The person who sticks to only those two assets is like a person eating meat and potatoes for breakfast, lunch, and dinner.

And the 60/40 portfolio isn’t just boring. In times like these, it’s hazardous to your financial health.

Bonds pay income over their lifetimes. And inflation erodes the buying power of those income payments.

So bond prices tend to fall as inflation fears rise.

That’s why bonds have sunk this month. As Bloomberg reports…

Global bonds are closing in on their worst month on record as investors brace for a flurry of rate hikes in the coming week, including the most aggressive U.S. tightening since May 2000.

The Bloomberg Global-Aggregate Total Return Index [a measure of investment-grade bond prices] has lost 4.9% in April, putting it on track for the biggest monthly drop since its inception in 1990.

Stocks are selling off, too… 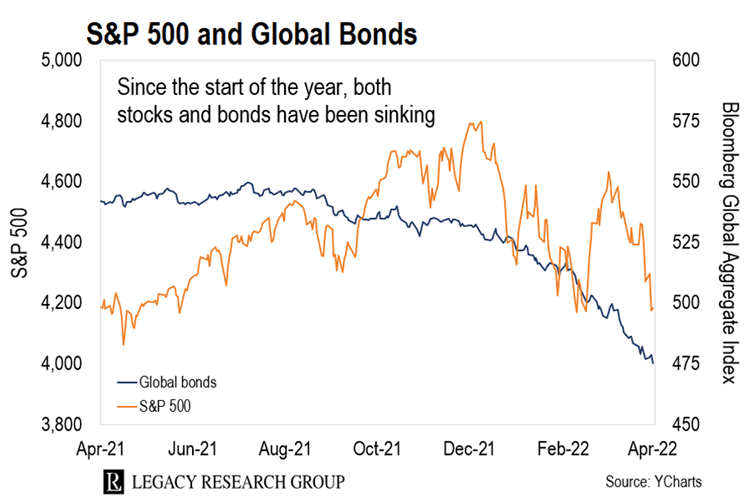 So the 60/40 portfolio doesn’t give investors the diversification they need.

That’s why Teeka targets a wider range of assets… 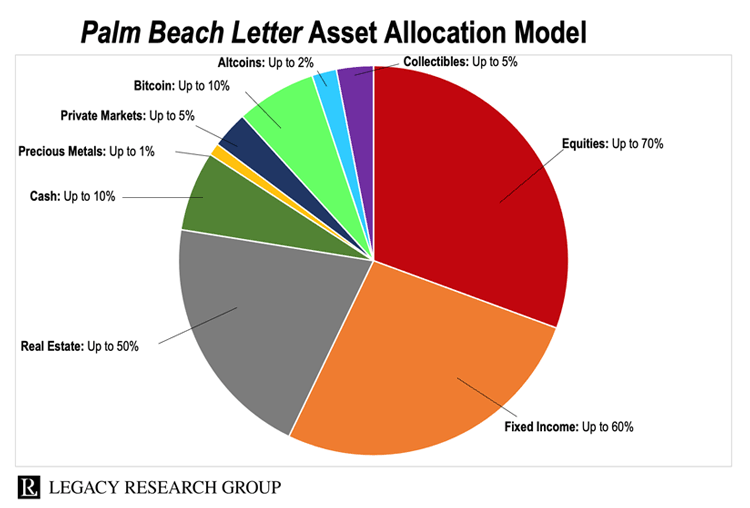 Teeka includes equities (stocks) and fixed income. But instead of relying on bonds for income, he recommends alternative income-producing strategies – including mining for cryptocurrencies and opening crypto income accounts.

You’ll notice these don’t add up to 100%. That’s because everyone is different. Exactly how you split your wealth is up to you.

If you’re younger, with a higher appetite for risk… you may want to max out your allocations to stocks, private market deals, and crypto. If you’re more conservative, you may opt for more real estate, cash, and bonds.

What’s most important is that you diversify your investments somehow.

To sum up, you want to prepare, not predict…

At Legacy Research, we zero in on emerging market megatrends that will help you make outsized gains over the next several years… even decades.

These include the crypto revolution… artificial intelligence… gene-editing… and the clean energy transition.

But we can’t be sure whether the stock market will be higher or lower over the next three months… six months… or year.

So instead of trying to predict what will happen over these timeframes… prepare for different outcomes with an asset allocation plan.

This plan should cover both offensive and defensive plays.

You can still aim to shoot the lights out with cryptos, pre-IPO (initial public offering) shares, and biotech stocks, for example.

But you should make sure you also have a good chunk of your portfolio in less volatile investments such as cash and gold.

And keep an eye out for tomorrow’s mailbag edition of the Cut. Teeka, Jeff Brown, Dave Forest, and Jason Bodner will weigh in on how to ride out the more bearish market action we’ve been seeing.