The media missed the boat… again…

James’ note: Happy Thanksgiving, Daily Cut readers. We appreciate that you took time away from your family and friends to join us today, so let’s jump right in…

While the mainstream news outlets are busy talking about impeachment, the election, and other “big” issues, they missed one of the most important developments in medical history.

But we’ve got you covered…

You already know that The Daily Cut was created to cut through the claptrap… and show you how the world really works. And that includes sharing our insights on the things that directly affect you and your family.

That’s why, for today’s edition of the Cut, I had to bring you an important essay from our go-to tech expert, Jeff Brown…

Jeff just returned from an ultraexclusive biotechnology conference at MIT, where they discussed everything from the exposition of cell and genetic therapies… the use of artificial intelligence and machine learning in drug discovery… and potential cures for cancer… to bionic limbs that patients can “feel.”

As Jeff said, “You won’t find these stories in The Wall Street Journal or Bloomberg.”

But as a Daily Cut reader… you get the inside scoop.

A study published in Nature Medicine may be the biggest Alzheimer’s breakthrough we’ve had yet. The study centers around a genetic mutation that appears to stop the dementia that’s usually associated with the disease.

As we know, Alzheimer’s is a horrible disease. I’d wager that many of us know at least one person who has been impacted by it. And, of course, dementia is the progressive decline in the ability to think and remember that’s associated with Alzheimer’s.

There’s no cure. That’s one of the biggest issues in healthcare right now… trying to find a cure for Alzheimer’s.

Well, we are starting to get some clues…

We know there are specific genetic mutations that increase the likelihood of a person getting Alzheimer’s.

But researchers just discovered a unique case where a different genetic mutation may stop the symptoms of dementia even if the patient has the high-risk genes associated with early-onset Alzheimer’s.

Researchers identified a woman in Colombia who was predisposed to developing Alzheimer’s in her 40s. But she went more than three decades without ever experiencing any symptoms. No dementia. No confusion. No memory loss. Nothing.

And it all came down to a rare genetic mutation that scientists were not aware of.

This is huge. Now that we know the exact gene and mutation, scientists can target their research. We can gear therapies toward this specific gene.

And as longtime readers are probably thinking, CRISPR could be a perfect solution. As a reminder, CRISPR is a genetic-editing technology that can “program” our DNA as if it were software code.

In the case of Alzheimer’s, I can envision two CRISPR approaches.

But first, let me give you a quick crash course in how genetic editing works. It’ll make it easier to understand how the technology could be used to cure Alzheimer’s in the not-too-distant future…

CRISPR is like a software-development platform for hacking plant, animal, and human genomes.

It is a way to program the genome and remove the “bugs” – or, in genetic terms, the mutations – from DNA.

Genetic editing can be used to “fix” or improve the genetics of any living thing. To say that this technology is revolutionary is an understatement. It will empower the human race to do things like:

What makes CRISPR so revolutionary is the simplicity of its use. 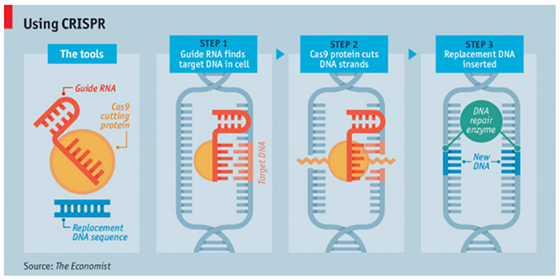 We can see the CRISPR-Cas9 system at work in the simple diagram above. First, the scientist or doctor finds the segment of DNA that contains a genetic mutation responsible for a disease or condition.

Put simply, it is drawn to it.

After the guide finds the target DNA, the Cas9 protein is used to cut the defective DNA and insert the healthy replacement DNA. The replacement DNA has the potential to cure the disease originally caused by the genetic mutation.

The DNA has been “edited” – hence the name genetic editing.

First, we could use CRISPR to “knock out” the genetic mutation responsible for increasing the likelihood of a person getting the disease in the first place.

Second, we could modify the gene just identified in the Colombian woman to exhibit the same mutation. In other words, CRISPR will give Alzheimer’s patients the genetic mutation that stops dementia in its tracks.

So this is a huge breakthrough on the path to a cure.

Precision medicine researchers can now focus on specific genes linked to Alzheimer’s. Obviously, it won’t happen right away, but we will certainly see a cure in our lifetimes. Now we have a catalyst for making that happen in the near future.

Here’s the most important point: Only a handful of companies own all of the essential patents for CRISPR technology.

That means that any biotech or pharmaceutical company that wants to develop CRISPR-backed therapies must come to one of these firms.

That’s why it’s essential to establish your positions in these firms now… before the deep-pocketed pharmaceutical firms come knocking.

My longtime readers know I don’t do this often, but I have to insist… Every serious technology investor needs to have some exposure to key companies in this space. If you miss this opportunity, you will regret it for the rest of your life.

And one CRISPR company in particular is about to make headline news. I have good reason to believe that this company is on the verge of curing a debilitating disease just like CRISPR’s CTX001 is doing with sickle cell disease and beta thalassemia.

And when that happens, I believe shares could shoot 1,000% higher quickly. Again, every serious technology investor needs to own shares in this company… right now. Go right here to watch my full briefing.