Welcome to our weekly mailbag edition of The Daily Cut…

It’s a packed issue. So I (Chris Lowe) will dive right in with a question for Teeka…

As regular readers will know, Teeka became the youngest-ever vice president at Wall Street firm Shearson Lehman when he was just 19.

He later set up his own hedge fund… before leaving Wall Street and starting his own newsletter.

To my knowledge, he was the first in our industry to recommend individual cryptos in a major financial newsletter.

And his readers are glad he took the plunge.

Teeka first recommended bitcoin (BTC) to subscribers back in April 2016.

But it hasn’t been a straight shot higher.

The drop comes on the heels of news that the ruling Chinese Communist Party (CCP) is cracking down on bitcoin miners and exchanges.

And one Teeka reader wants to know what it all means…

Reader question: We need Teeka to inform us regarding the horrendous price drop in bitcoin. The losses have been staggering, and it appears the “China Problem” is growing. Any words of wisdom? They’d be greatly appreciated.

Teeka’s response: Thanks for getting in touch, Frank. For a lot of people, this is their first crypto market cycle. If this is your first time going through crypto volatility, it’s very troubling and frightening. And it’s easy to get caught up in the sea of negative sentiment and headlines you’ll see plastered all over the internet.

There’s one region of China where the vast majority of bitcoin “mining” occurs. [Bitcoin miners get paid in newly issued bitcoin for providing computing power to keep the bitcoin network secure.] And the authority that runs that region has let miners there know it’s shutting off all their electricity.

Hash power is the power your computer or hardware uses to solve the algorithms necessary to keep the bitcoin network secure. When you disrupt or threaten the vast majority of the hash power on the bitcoin network, people panic. They panicked when it happened in 2013, 2015, and 2017. That’s been happening again, which has not been great for the price.

The second piece that’s freaked people out is the CCP has told all of its major banks and payment companies they’re no longer allowed to provide fiat banking services to anything remotely attached to crypto. It won’t let people swap Chinese currency for crypto, in other words.

That means there’s no fiat on-ramp – or off-ramp – for crypto. You can’t take your Chinese yuan… deposit it at a bank… and exchange it for bitcoin or any other cryptocurrency. And you can’t sell your crypto into fiat cash and then remove it from a bank. People are losing their minds about this.

This has created some problems…

Because the CCP has shut down mining… and because it’s shut down access to capital… bitcoin miners in China have no choice but to sell their bitcoin to raise capital to fund the moves they have to make to friendlier jurisdictions.

They’ve already sold about $2 billion of bitcoin to free up capital so they can move their assets.

You see, many bitcoin mining operations in the U.S., Canada, or other parts of the world have gone public. This has allowed them to tap into the capital markets either through issuing shares or debt to fund their operations. But Chinese bitcoin miners have had to fund themselves… through selling the bitcoin they receive as rewards for providing computing power to the bitcoin network.

Chinese miners may not want to sell their bitcoin, but they have no choice.

So I want you to think about it logically. Imagine you’re a major bitcoin investor, and you know a bunch of miners are selling off their bitcoin to fund themselves. And they’ve got a couple of billion dollars’ worth of bitcoin. Are you going to keep your bid at the $35,000 to $60,000 range?

Absolutely not. You’re going to walk your bid down. You’re not going to pay $40,000 per bitcoin when you know you can buy it at $29,000. That’s exactly what’s happening right now. There are forced sellers in the market, and the buyers are smart.

You can read on here for more on why this is all temporary and not a reason to sell your bitcoin. In fact, I’ve been telling my readers that now is a time to buy.

The mainstream view is that the transition to renewable energy will kill off the oil industry.

But the oil bears have it wrong.

Now, one reader asks Kris to take a deeper dive…

Reader question: I’ve been reading your excellent articles on the oil comeback, and I’m glad you are convinced that oil is going to stay strong. However, as a locomotive designer, I try to look down the track a ways, so I would like to have you address the following:

I enjoyed your articles. Keep up the good work.

Even though the U.S. and Europe effectively closed their economies for much of 2020, worldwide oil demand fell less than 10% last year.

So we see no threat to fossil fuel demand. 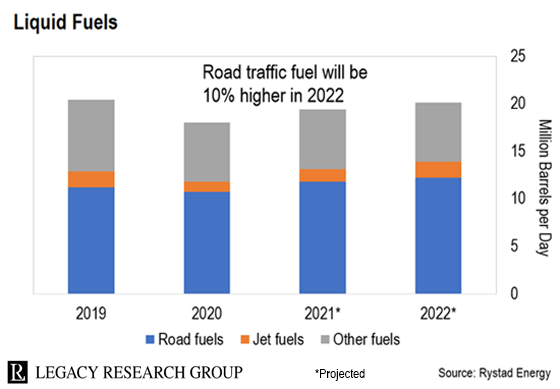 It’s too soon to write off the fossil fuel industry. Even if electric car sales increase, that just shifts the energy consumption from the internal combustion engine within the car to the power station that distributes electricity to the grid.

To be clear: I don’t have a philosophical hatred of green energy. I’m all for it. But I like to see the free market decide when, what, and how new technologies take over from fossil fuels, rather than governments imposing their choices on the people.

We’ll wrap up today’s dispatch with a question for Tom Dyson.

If you don’t know him already, he cofounded Palm Beach Research Group with Mark Ford.

Now he heads up Tom’s Portfolio, an advisory focused on gold investing.

And he writes our Postcards From the Fringe e-letter. It’s where he chronicles his perpetual world tour with his family. It’s also where he writes about the $1 million bet – almost his entire life savings – he made on gold in 2018.

In short, Tom believes gold will trounce stocks over the coming years. He sees the yellow metal as a safe haven from devalued fiat currencies.

And as the U.S. national debt climbs higher, one of Tom’s readers wants to know if the U.S. will go the way of Japan…

Reader question: The U.S. debt is now 135% of GDP. Japan’s debt is now 250% of GDP. What is to stop the U.S. from simply becoming Japan[, with an ever-rising debt load]? As always, thank you and keep up the good work.

Tom’s response: This is something I’ve thought about a lot. My conclusion is, Japan is in a totally different position from the United States. That’s because Japan has a current account surplus, which means it exports more than it imports… which means it earns more foreign currency than it spends… which means Japan is a nation rich in income.

Also, Japan has a positive net international investment position, which means it owns more assets abroad than foreigners own assets in Japan. If it ran out of income to finance its debts, it could sell overseas assets.

In other words, Japan can afford its debt. The U.S., on the other hand, has the largest current account deficit in the world. That means it imports more than it exports, which means it’s externally funded.

Also, foreigners own far more American assets than Americans own foreign assets. In other words, the U.S. is a consumer, not a producer, and relies on foreigners purchasing U.S. assets to survive.

In my opinion, U.S. finances have much more in common with countries like Zimbabwe or Argentina.

Now, none of this means the debt bubble is about to collapse. But I find myself more and more drawn to betting that the stock market is fully valued. And that the smart thing to do – if anything – is bet the next big move is to the downside.