This week, we’ve been even more insistent than usual that you stock up on gold… even though it’s down 3.7% today.

As we showed you, coronavirus is leading to monetary madness… and central banks are ramping up their stimulus… which will cause gold to soar.

So to kick off this week’s mailbag edition, we have a question about investing in our favorite precious metal. E.B. Tucker, one of our go-to gold experts here at Legacy, has the answer.

Reader question: What do you recommend for gold investments at this time? Bullion, or stocks? And if stocks, which ones?

With the cost of an ounce of gold approaching $1,700, it makes it hard to invest in the real thing (for those of us fully invested in stocks).

Would love rapid feedback on this before the price approaches $2,000 (!) and gold stocks go up even further. I (along with millions of others) took a royal bloodbath with stocks on Monday. So I am anxiously awaiting your reply. Thanks!

E.B.’s answer: Ed, we’re in the early innings of a new gold rally. From my view, I don’t see a lot of new money getting involved yet. If I’m right, it means you haven’t missed much.

Keep in mind, gold spent close to seven years carving out a painful bottom. While the actual low price printed in late 2015, the gold industry barely showed signs of life as recently as last year.

A lot has changed with gold miners since the gold price hit its previous peak in September 2011. As a group, they shed unproductive assets, wrote down bad investments, and cleaned house. Several of them merged, shrinking the number of gold mining companies altogether.

One thing they did not do as a group was invest in new sources of gold. Investment in exploration lagged badly during the bear market. That means if the physical gold price continues to move, drawing in more buyers, there won’t be new sources of supply hitting the market to meet that demand.

When the gold rally does kick into high gear, mining stocks will likely take off. It could be very exciting. Having been through this before, I can tell you they move at a pace not seen in other markets. However, you’ve got to keep your head on straight, as what goes up can come right back down.

I prefer royalty companies. I helped establish one such company (which I can’t mention here), and I’ve recommended the shares of its most formidable competitor, Maverix Metals (MMX). There are others. Franco-Nevada (FNV) is the largest. Wheaton Precious Metals (WPM) has the most silver exposure. I call these four royalty companies the “four horsemen” of the coming gold rally.

Royalty companies take an off-the-top percentage of all mine production. They don’t share in the operating expenses incurred mining gold or silver. They represent a perpetual (don’t expire), non-dilutive (can’t be reduced by reckless management) economic interest in a mineral claim. While they don’t always run as fast as a hot mining stock that just hit a new gold hoard, royalties have impressive resilience, holding up quite well in bear markets.

I hope that helps!

Next up… another question about gold.

In 2018, Tom cashed in all his dollar-based savings for gold… And he’s been writing about his big trade on a near-daily basis in his Postcards From the Fringe e-letter…

Reader question: The best ongoing education would be to create a graph of stocks versus gold 10-year returns and monitor it into the future. But I’m not smart enough to understand how to do that. Can you walk me through this process of how to go about creating the graph?

Tom’s answer: Each year, you compare the annualized total return of the S&P 500 and of gold over the previous 10 years. 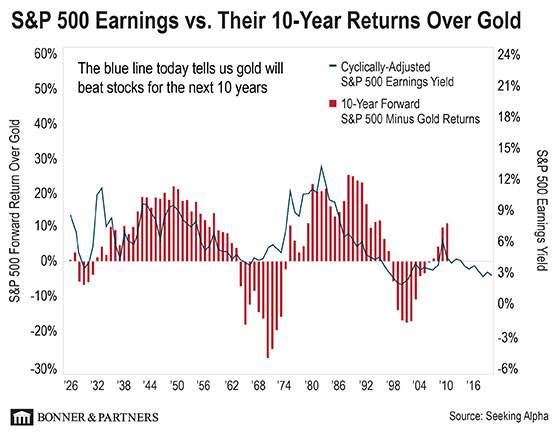 On January 1, 2021, you repeat the calculation for the decade 2011-2020. You then repeat this calculation each time a new year passes. This gives a clearer image of the big picture on gold than its annual price fluctuations do.

­­To stay posted on updates to this chart, sign up here to get Tom’s Postcards From the Fringe straight to your inbox each weekday.

Wrapping up this week’s mailbag is our go-to tech expert, Jeff Brown. He sets the record straight about the security of 5G-enabled devices…

Reader question: Hi, Jeff. You said to wait until later this year to buy a 5G-enabled phone. This is a follow-up question.

I have bought my last Android phone; I am an Apple girl from here on out. You’ve spoken a lot on the security risks that are coming with the new quantum computing power that is on the rise. I’m guessing our 256-bit encryption will shortly be very obsolete. Do you know if Apple is working behind the scenes on new encryption tech to protect our data? If so, can you share it? Thanks for being a total rock star.

Jeff’s answer: Thanks for writing in, Kelly. And thank you for being a reader. Happy to have you onboard.

For readers who missed it, my advice was to hold off on buying a 5G-enabled phone for now, and to purchase a newer model this fall when the new 5G-enabled iPhone is released. The current models use modems that won’t be able to make full use of the 5G networks when they are fully built out.

And I have a strong preference for Apple iPhones. As a company, Apple places a strong emphasis on user privacy and security. Android’s operating system, on the other hand, actively collects user data and uses it to target us with ads.

But to your question, Kelly, could a quantum computer hack the encryption on a device like an iPhone?

Your guess is spot-on. The 256-bit encryption used on all of our phones will be obsolete, or not secure, in the near future.

I have no idea if Apple is working on a new form of encryption. But whether it is or not is less relevant.

Why? Because if Apple designed something specific, it could be used only by Apple iPhones. That means there would be issues if, for example, an Apple iPhone user wanted to send an email to a friend with an Android OS device.

The 256-bit public-key encryption is a standard that is used by pretty much everyone. Because it is a standard, consumers can use this secure technology seamlessly. It all happens in the background.

The National Institute of Standards and Technology (NIST) in the U.S. has been actively working on a new standard for quantum-resistant public-key cryptography. To NIST’s credit, it started this process back in 2016, well in advance of the moment of quantum supremacy we reached last September.

And there are academic institutions, corporations, nonprofit research organizations, and many others contributing to this process of figuring out what the next form of public-key cryptography will be.

As a final note, I had the opportunity to experiment with IBM’s quantum computer during a professional training course at MIT earlier this month. I was actually able to write and run some very basic programs on the cloud-based quantum computer.

I’m devoted to keeping readers up to date on this trend, whatever it takes. I’ll be spending much more time this year with MIT specifically because the developments in quantum computing are happening so quickly. My Bleeding Edge subscribers can expect to hear much more about quantum computing in the months and years ahead. If you’re not yet a subscriber, I invite you to join for free here.

We’d love to hear your thoughts on these topics… and any other questions you have for our experts. Write us at [email protected].