With these gains in the rearview mirror, it’s easy to think you’re too late to profit. But as Teeka reveals in this urgent video, we’re about to see a new phase of even bigger profits. That’s because the tech that gave birth to bitcoin is kicking off a new revolution…

Learn more from Teeka below.

So far, 2020 has been a series of unrelenting shocks.

It’s no surprise when The Wall Street Journal asked readers how they thought things were going, 8 out of 10 felt America was spiraling out of control.

Folks, it takes much less than 80% of the population to trigger a revolution.

Leading up to the American Revolution… some historians estimate only 1 in 4 colonists supported the rebellion against Britain.

But that’s exactly what happened.

Seemingly minor acts such as Paul Revere’s ride and the Boston Tea Party ignited a revolution.

A small group of colonies took on the most powerful empire in the world and won.

Today, you may hear folks say a revolution like that could never happen again. And yet the facts are clear… It’s already started.

But this time, it won’t be a violent revolution. Instead, it’ll be a technological one. And like any revolution, there will be winners and losers…

When people read the word “revolution,” they often think violence. I can understand that.

The French, Russian, and Iranian revolutions were some of the bloodiest in history.

But history teaches us that the greatest revolutions weren’t borne of violence. They were borne of technology.

During the Industrial Age (1750-1900), we vastly improved the steam engine. We invented the automobile, the stethoscope, and the telephone. We made great advances in medicine… including the discovery of antiseptics and anesthesia.

Even during the Great Depression, more Americans became millionaires than any other point in our nation’s history. Think of industrialists like Ford, Rockefeller, Vanderbilt, and Carnegie.

The same holds true for every major economic development since.

Recall what happened during the last major shift – the Internet Revolution:

Craigslist, Uber, Skype… All of these internet-based businesses – and hundreds more like them – have made people who saw the change coming rich.

How can I be so sure we’re about to experience something similar?

The next great tech revolution will be powered by the blockchain.

That’s the decentralized ledger technology behind bitcoin and other cryptocurrencies that cuts out middlemen.

I know it sounds crazy. Most people think blockchain is just for cryptocurrencies.

But friends, nothing could be further from the truth. Blockchain is the most explosive, transformative technology in the history of the world.

I’ll go out on a limb and say blockchain technology is the No. 1 investment of this decade.

I realize that’s a big call… But I’m not the only one who sees the growth potential of blockchain tech.

The World Economic Forum (WEF) says blockchain will account for 10% of global GDP by 2027. That’s an estimated $8.6 trillion.

Blockchain tech was first implemented in 2009. Yet in less than 15 years, the WEF expects it to surpass some of the biggest tech names in the world.

Soon, we’ll see the birth of an entirely new system.

That’s the thing about technology. As we become more advanced, the speed of transition and pace of innovation increase.

Look at the chart below. It shows how fast technology advances… 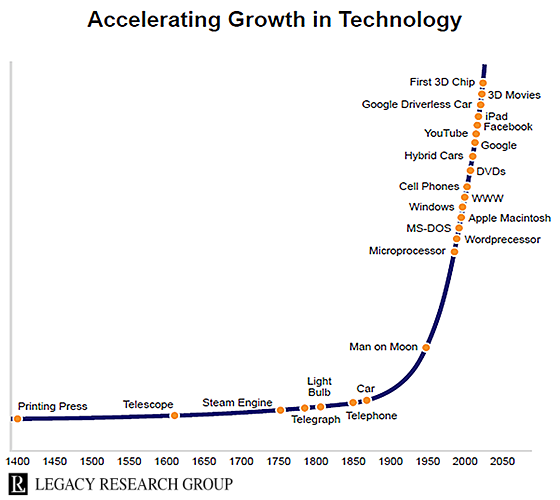 Whether you choose to invest in this revolutionary new technology or not… it will change your life for the better. Just like the internet, the automobile, and airplanes did.

But if you grasp its promise… and place a small, calculated bet right now… it could forever turn your life around, just like it has for countless other early investors…

That’s why I’m writing you today: To make sure you’re ready for the next big transition.

That way, at the very least, you won’t be caught off guard by the massive changes underway.

Because if you truly understand what’s about to happen, you’ll realize we’re at an early enough stage that you still have time to take advantage of what is no doubt a once-in-a-lifetime opportunity…

You see, there are two sides to every economic shift like the one we’re about to experience.

On one side, folks are devastated. Jobs disappear. Entire businesses… even industries… vanish at an astonishing rate.

But then there’s the other side… The folks who took advantage of this shift and harnessed its potential.

The money they make wraps them in a lifelong cocoon of comfort and security. This is already the reality for many of my subscribers. I want it to be your reality, too.

I want you to understand this is one of the biggest economic stories I’ve come across in my professional investing career.

I’m running out of space here to get into all the details. But if you want to get in on the ground floor of the next tech revolution before it hits the mainstream… watch my urgent briefing all about it.