On Saturday, for the first time ever, the world’s first and most famous cryptocurrency rose above $60,000. 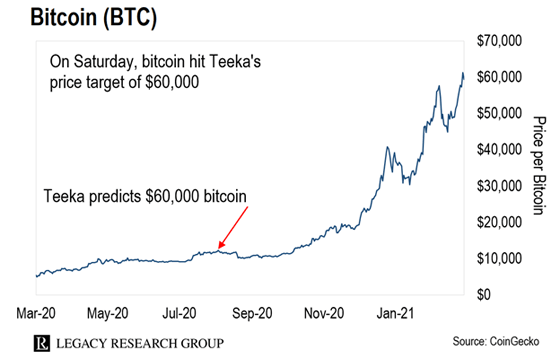 $60,000 bitcoin may come as a surprise to folks tuning in to the mainstream news. But it won’t surprise longtime readers of colleague and world-renowned crypto investing expert Teeka Tiwari.

I’m not going to paint myself into a corner and say when. But it will happen a lot sooner than most people realize.

When Teeka made his prediction, one bitcoin (BTC) was trading for $11,840.

So Daily Cut readers who bought some bitcoin on Teeka’s recommendation have had the chance to make a gain of 406% since then.

Back then, you could have bought one bitcoin for about $400. That’s about a 14,900% gain for folks who acted on his original recommendation.

And as I’ll show you today, that’s not even the biggest gain Teeka has delivered for his subscribers. As incredible as it may sound, it’s peanuts compared with some of the gains on his “altcoin” recommendations.

In August 2018, we created this e-letter as a premium for all paid-up subscribers of Legacy Research.

As your editor, I (Chris Lowe) have one goal – make sure you never miss a big idea from Teeka, Jeff, Doug, Bill, or the rest of the team.

And the rise of the crypto economy… and the blockchain technology it’s built on… is one of the biggest ideas I’ve been sharing with you.

As Teeka has been hammering home since he first started recommending cryptos four and a half years ago, bitcoin was the first “app” for blockchain. But there are many more…

That’s where altcoins come in…

That’s short for “alternative coin.” It means any crypto other than bitcoin.

Some altcoins compete with bitcoin as peer-to-peer electronic cash. But most of them have no direct relationships to cash payment networks. They’re just other apps on a blockchain.

It’s the same as how Microsoft Word doesn’t compete with Microsoft Excel. They’re both apps that can run on the Microsoft Windows operating system. But each has an entirely different function.

You see, bitcoin isn’t just a currency. It’s also a software application. And the blockchain “operating system” it runs on is a new kind of secure, distributed network.

Bitcoin was a solution to the problems of a government-run money system. But that just scratches the surface of what blockchains are capable of.

By connecting to the Storj Network, anyone with a computer can rent out excess disk space to people who need secure extra storage.

I say secure because on this network, your data is encrypted, then broken into fragments and distributed across multiple hosts.

That makes it extremely difficult for a hacker to steal. First, they’d have to find each fragment and reassemble it into its original form. Then they’d have to break the encryption.

Like all blockchain networks… you pay for services on the Storj Network in a native cryptocurrency. In this case, it’s a coin called STORJ.

And if you’re someone who’s renting out extra disk space, you get paid in STORJ. You can then use it to buy other cryptocurrencies… or convert it back into U.S. dollars or whatever fiat currency you use.

Another notable example is the Brave web browser…

It issues a cryptocurrency called the Basic Attention Token (BAT). Together they’re a solution for getting paid as a content creator online.

Typically, someone who puts content online – say, a blogger or a local newspaper – gets paid for the content by running ads on their site. That’s why a barrage of ads clamors for our attention when we go online.

Brave is similar to the Google Chrome or Microsoft Edge web browsers. But it strips the ads from the web pages you visit.

That means bloggers can’t get paid for showing ads to their readers.

When you use Brave as your browser, you can tip content creators in BAT.

They can convert their BAT to bitcoin, another altcoin, or the U.S. dollar. So they don’t have to serve you annoying ads to earn a living.

I’m not talking about just the fact that they’re building on blockchain technology. It’s something more profound.

They’re all ways of moving power from institutions… to individuals.

With bitcoin, the power moves away from banks and central banks to regular folks.

With STORJ and BAT, it moves from corporations to individual computer users.

Altcoins have been a hugely profitable ride so far…

It concerned 41 of his altcoin recommendations in the Palm Beach Confidential model portfolio.

And it unleashed an extraordinary wave of profits for longtime readers who followed his recommendations.

Teeka didn’t tell them to sell out of their positions entirely… He still sees huge upside ahead for the altcoin market.

Instead, he urged them to “scoop a little cream off the top” and take some profits. As he explained it…

As you know, we have huge gains across the board. It’s now prudent to take a little off the table, so you can recoup your initial investment and, in some cases, a whole lot more.

My focus in the crypto space is on the long-term trend… and it’s still up. Over the short term, though, I’ve lived through enough pullbacks to recognize it feels good to lock in some gains even though I still believe all these projects will go higher.

The profits so far are the most jaw-dropping I’ve seen in my 20 years observing and writing about markets.

Here’s how that sell alert broke down…

First, he recommended selling 30% of 13 individual altcoin recommendations in the model portfolio.

The average gain across these seven positions was 1,739%.

He recommended selling completely out of four other altcoins in a third category.

And in case you think I’m cherry-picking, Teeka also booked some losers.

He recommended his readers sell completely out of 11 losing positions… for an average loss of 63%.

Losses are never pleasant… But you can make a lot of money booking losses in the double digits on some of your positions, while making triple- and quadruple-digit gains on the majority of them.

Take it from Teeka’s subscribers…

Since his epic sell alert… they’ve inundated us with moving thank-you notes.

I’ve shown you some of these before. But they keep coming in. Here’s just a small sample of my favorites…

T asked us to comment on recent gains and what we’re doing with them. I’ve been with Teeka’s Palm Beach Confidential advisory since 2017. I’ve been really lucky to have his guidance, especially during the insufferable 2018, 2019, and most of 2020.

Those were dark times to get to the good stuff… however, I profited a lot from NEO (NEO) – made about $200,000. I had about a half a million near the top. My wife and I were able to travel to Australia, New Zealand, Iceland, Russia, and France.

After living through the last three years with Teeka’s guidance and support, I continue to accumulate various cryptos. I was able to pay off our mortgage of $200,000, pay off other debts, and begin fixing up our house, which needs many repairs.

The crypto gains will also serve as a complement to our retirement. I’m 59, but feel I’m truly retired now, and my wife was able to quit her private practice and is retired as of December 2020. So I have to say, all in all, crypto has changed our lives for the better. And all that FUD (fear, uncertainty, and doubt) noise hasn’t stopped me from learning more, staying with it, and looking forward to more Teeka. So please thank him very much.

I took 30% profits from my crypto investing. Going to preorder an Audi e-tron GT quattro by next week. 🙂 Waiting to get my money transferred from Binance, where I sold my crypto. Thank you, Teeka!

My total crypto portfolio has grown from $10,000 a year ago to $325,000 at the latest peak. I’m super excited about the boom we’re going to see throughout this year and onward. Thank you Teeka, for your guidance and coaching… You’ve changed my life BIG-TIME!

You may be thinking you missed the boat…

That’s only normal when you see these kinds of gains in the rearview mirror.

But Teeka believes we’re still in only the early innings of the crypto bull run.

Only 35 or 40 million people actively invest in cryptocurrencies. And there are 500 million investors in the world. You don’t have to be a rocket scientist to figure this out. It’s just supply and demand.

I’ll have more for you on the ongoing crypto boom in future updates. Meantime, catch up on Teeka’s big call here.

And if you haven’t already, consider dipping a toe into the crypto market with a small bitcoin purchase.

You can find out how to do that in our free one-page guide here.