Welcome to this week’s mailbag edition of The Daily Cut.

Today, there’s a debate raging among your fellow readers over the world’s first cryptocurrency, bitcoin.

You’ll also hear from our resident geologist, Dave Forest, on how to time your gold investing.

First, let’s tackle head on the debate over bitcoin…

As regular readers are aware, we’re bullish on bitcoin here at the Cut.

We’ve been recommending you buy some since we created this e-letter for all paid-up Legacy Research subscribers in the summer of 2018.

Backers of bitcoin on the Legacy team include Teeka Tiwari, Jeff Brown, and Nick Giambruno.

But at Legacy, we don’t do groupthink… And not everyone here agrees bitcoin is a good bet.

In his daily e-letter, Postcards From the Fringe, colleague Tom Dyson has been arguing that bitcoin is fatally flawed. That’s because it breaks what he calls the “golden rule of money.”

Since then, he’s been pounding the table on why gold is going to be the world’s best-performing asset over the next decade or so.

But he says gold is a much better form of money because it has intrinsic worth and is useful in its own right.

People use gold for jewelry and in technology. That’s where Tom’s golden rule comes in. Gold’s usefulness outside of being a form of money makes people trust it as payment because they know it will always be in demand.

On the other hand, Tom says bitcoin is just a “clump of electrons.” It has no intrinsic value. That’s why he believes gold will triumph over bitcoin in the end.

And it’s stirred up quite the controversy in the mailbag…

Reader comment: I agree bitcoin is not real money. Real money – like gold – is always useful in its own right, divisible into convenient amounts, and in limited supply. Electronic currencies just don’t qualify.

Reader comment: Bitcoin is not “money” in the traditional sense. But it is a currency. Therefore, it will compete with other currencies. And it will be more valuable, because it’s private and outside government control.

Reader comment: Our paper dollars are not a useful material either. Anything can be used as money as long as a society places its faith in it.

As more companies accept bitcoin as a medium of exchange, a society will adopt the “currency” that holds the most purchasing power over time. And the hardest of all assets is bitcoin.

Gold fits all four characteristics well. It is durable and easily portable as coinage. Aside from jewelry (which can be viewed as an alternate mode of portability), it has little other industrial utility. And there is a finite supply of gold to be mined on Earth.

Bitcoin fits all four characteristics better than gold. Its durability and portability are electronic. It has no other utility other than as a medium of exchange. And its supply is finite by definition in its blockchain software.

The adoption and use of digital cash will make people more comfortable with the idea of bitcoin as digital gold. The ease of swapping digital cash for bitcoin and vice versa will make bitcoin the preferred medium to hold value in an inflationary, digital-fiat world.

Of course, if we lose our ability to generate electricity, we can always fall back on gold.

Does Tom’s golden rule of money matter? Does an electronic money compete with gold, which has use in other parts of the economy? Send us your thoughts at [email protected].

Now, on to a question about how to time your investments in gold. Standing by with an answer is our resident geologist and commodities investing expert, Dave Forest.

Some of his gold picks are up as much as 280%… 347%… even 477% since he recommended them within the past two years. All in all, he sports an impressive 77% average return on his mining stock recommendations.

Dave views physical gold as disaster insurance for your portfolio. In a stock market crash, it tends to rise in price as investors start to panic and seek out safe-haven assets.

That’s what sent the price of an ounce of gold soaring from $712 to a peak of $1,895 in the roughly three years after the 2008 global financial crisis. 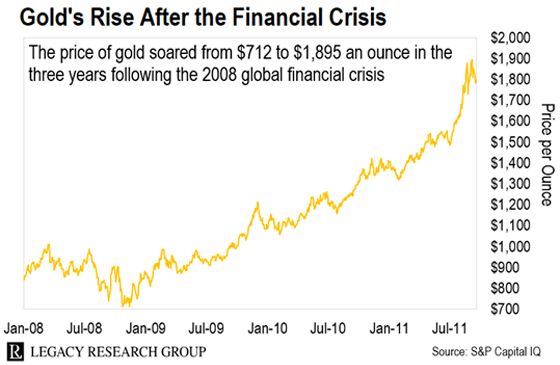 But as Dave has been showing his readers, gold tends to dip along with stocks in the initial stages of a crash. That’s because overleveraged speculators are forced to raise cash to cover margin calls. So they sell off anything that isn’t bolted to the floor – including gold.

And it’s gotten one of Dave’s readers thinking…

Reader question: I enjoy reading your advice, especially on gold. I am nearly 100% invested in gold myself. Last week, you pointed out that gold will also dip when the stock market plummets.

If this is the case, why would we not just sit on the side, with cash in hand, waiting for the big dip in stocks? Then we could buy up gold and silver in the dip and get bigger gains?

Dave’s answer: Great question – and there’s a simple answer. The market might not dip.

We’re in uncharted waters in terms of the economy and monetary policy. The Fed created $3 trillion new dollars in a few months after the March corona-crash. That’s double what it printed in the wake of the 2008 crisis.

On the one hand, this means things are shaky. A crash is certainly possible. On the other, there’s a lot of new liquidity sloshing around. This could supercharge assets, including stocks. It’s possible we’ll get a rip-roaring bull run.

If that happens, I expect all commodities – and especially gold and precious metals – to do extremely well. We could wait for a crash, but it’s possible we’d be waiting a long time. And we’d risk missing some exceptional gains in the meantime.

It makes sense to be at least partly invested in gold and silver to catch that wave. But as you say, it’s also a sound idea to keep some cash on the sidelines. And having money to buy precious metals on a hard dip will indeed be a path to big profits.

Finally, a question about another of the big profit themes we track for you – the EV revolution.

As regular readers will know, one of our favorite ways to play the switchover from internal-combustion cars to EVs is through what Dave calls “tech metals.”

As I explained here, these are metals, such as nickel and lithium, that go into the rechargeable batteries that power EVs.

But as one of tech expert Jeff Brown’s sharp-eyed readers points out, we’re also going to need a lot more electricity to recharge these vehicles. And he wonders if there’s an investing angle to pursue…

Reader question: It seems there is a general agreement that electric vehicles will rapidly become a much larger share of total vehicles on the road, especially if predicted advances in battery technology work out.

If this happens, it seems to me it will require a massive expansion in the capacity of the electrical grid. What do you see as the best way to profit from this?

Jeff’s answer: Good question, William. Not too many people make the connection that more EVs on the road will require dramatically more electricity… and the infrastructure to support it.

Most folks think that if we buy an EV, there’s less pollution, and we just have to “plug it in.” But it’s critical for us to understand where the electricity comes from to fuel an EV.

The reality is that fossil fuels (carbon-based) and/or hydroelectric sources that damage natural freshwater ecosystems still produce the majority of electricity. That’s true even in California – a state we may think of as “green.”

This means the carbon released into the atmosphere is simply displaced. It’s released at a power plant rather than in our neighborhood.

So countries need to build new infrastructure for clean energy production. That includes solar and wind where they make sense. It also includes nuclear fusion. Unlike the fission reactors we use today, fusion has no radioactive by-products.

I’ve written a lot about the potential for nuclear fusion. You can download a free bonus report right here to find out more about a private company I’m keeping a close eye on.

I’m also excited about companies making bleeding-edge battery technology for EVs. I also like to focus on autonomous driving technology.

Lastly, the semiconductor industry is going to yield a lot of winners. Look for companies making products for solar energy and EV-charging infrastructure.

That’s all for this week. If you have questions for your favorite Legacy expert, send them to [email protected].