It’s Friday… So it’s mailbag day here at the Cut.

As you’re probably all too aware if you have money in the markets… volatility has been spiking in 2022.

This wiped more than $200 billion off the company’s market value… the biggest one-day market value drop in history.

But don’t worry… At Legacy Research, we’ve got your back.

Next Wednesday, February 16, at 8 p.m. ET, Jeff is holding a special briefing.

He’ll cover how to handle current tech market volatility… what to buy, what to hold, what to sell… and the exact date tech stocks will start going back up.

And he’ll unveil his new “100x plan” for making back every penny you lost, and a whole lot more…

So make sure you follow this link to register to attend. Then read on below for Jeff’s responses to his readers’ questions.

First up, one on what Jeff has been calling “biotech winter” – the brutal bear market in biotech stocks over the past 12 months.

The SPDR S&P Biotech ETF (XBI) tracks a basket of leading biotech stocks. As you can see, it’s plunged 46% from its February 2021 high. 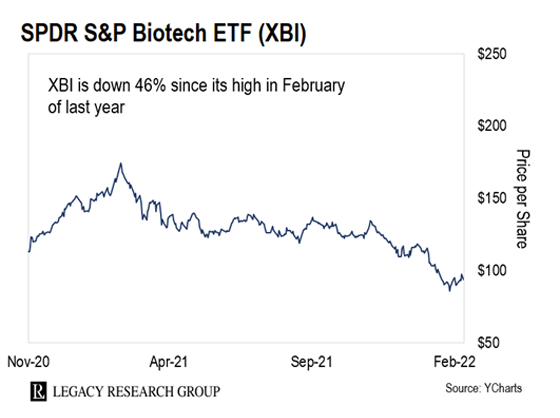 Jeff says the plunge has nothing to do with the fundamentals of the sector. And he expects a recovery soon. But it’s still worrying one reader…

Reader question: Hello, Jeff. My concern is what if there is a big market crash this year? How does that affect our biotech stocks? They are really low now! How much more would they drop?

Jeff’s response: Hi, Steven. Thank you for reaching out.

You’re right. The drop in the biotech sector has been painful to watch.

Many biotech companies are now trading at valuations equal to the cash they have. There’s not much downside left when that’s the case. And the potential upside is massive.

I believe we’re on the cusp of a resurgence in biotech.

In an interview two weeks ago, biotech stock strategist Jared Holz at investment bank Oppenheimer said this is the most bearish Wall Street has ever been on biotech.

It may surprise you. But I take this as good news. Consider other extreme situations…

Irving Fisher was one of the most famous economists of his day. In 1929, he said, “Stock prices have reached what looks like a permanently high plateau.”

A few weeks later, the stock market cratered… and the Great Depression began.

And in 2009 – right after another brutal economic downturn – warnings to stay away from the markets saturated mainstream media.

But stocks were about to enter their longest bull market yet.

We always see extreme excitement at stock market tops… and extreme fear at bottoms. And for the biotech sector, we’re close to extreme fear…

So I remain bullish on the biotech sector in 2022. In fact, I wouldn’t be surprised at all if biotech was the best-performing sector this year.

Biotech isn’t the only sector Jeff is bullish on. He also sees a major opportunity to profit from the automation megatrend.

Now, a reader wonders whether robots can fulfill one specific task…

Reader question: Hi, Jeff. Will we ever use robotics for loading and unloading containers? High-quality surveillance could ensure they don’t smuggle contraband into the containers.

Automation tech has improved warehouse packing and sorting. Autonomous trucks are transporting containers around the country.

Boston Dynamics, for example, makes the Stretch robot. It has machine vision and an agile arm. It can move 800 boxes an hour. This makes it an excellent candidate for this kind of task.

Another interesting development is the bipedal Tesla Bot. It was only conceptual when Elon Musk announced it last year. Some in the media made fun of it. But it would be a mistake to doubt Musk and the Tesla (TSLA) team.

Boston Dynamics’ and Agility Robotics’ bipedal robots are capable of skilled movements – including lifting and carrying boxes. And their hardware and sensor tech work well.

Now imagine combining this autonomous tech with the bipedal robot hardware that already exists. It’s not a big leap to say Tesla can make a robot that can do a human’s work at a port or customs location.

We’ll see more and more of these kinds of use cases develop in the coming months and years.

That’s even more important given supply chain problems and labor shortages over recent months. The adoption of automation tech has come forward several years as a result.

And once companies realize how these technologies can affect their bottom lines… there’ll be no going back.

Switching gears, another reader has a question about electric vehicles (EVs)…

Reader question: Jeff, the recent Snowstorm Frida in Virginia left vehicles stranded for over a day. How do you keep warm in an EV? Would this use up the battery?

If so, would you have to tow the EV? If gas vehicles run out of gas, someone can bring them more gas.

Hello, Valsin. With the recent snowstorm on many people’s minds, this is a timely question. It was crazy to see pictures of highways that turned into parking lots. It reminded me of The Walking Dead TV show… only in winter.

I read some stories of how people stranded in Teslas kept warm in their cars. It’s possible. But the answer to your question depends on how much charge your EV has when you stop.

The same is true for an internal combustion engine (ICE) car. Its ability to keep you warm depends on how much gas is in the tank.

A full charge should keep a Tesla running for about three days. And although most drivers won’t have full batteries when they get stuck… an EV may last longer than a gas car in that situation.

An ICE car burns roughly half a gallon of gas an hour while idling. The average tank holds about 15 gallons. So a full tank would last only about 30 hours.

And an EV could keep you pretty warm even with just an electric seat. These are more common in EVs than in ICE cars. A full EV battery could support an EV seat heater for around a month.

Teslas are an exception because their seat heaters require a car’s computer to be on. But even with that higher power load, a full battery could last about a week.

Even if you decide to heat the cabin of the car rather than just the seats, an EV can still do so more efficiently than an idling gas vehicle.

Newer EVs also use heat pumps that are up to 400% more efficient at heating the car, which will let them keep passengers cozy even in a snowstorm.

And if your EV does run out of power, there are now business that deliver charge boosts, just as there are services to bring gas guzzlers a few gallons of gas. Charge-boosting services will become more common as more EVs hit the road.

If have a question for the Legacy experts, write us at [email protected].