Two sides are going to war… in the metaverse…

I (Chris Lowe) am not talking about the plot of a new sci-fi movie.

The metaverse is the new evolution of the internet the team here at Legacy Research has been putting on your radar.

But this is all still new. So naturally, there’s still a lot of confusion over what the metaverse is and who’ll control it.

If you’ve been following along in the mainstream press, you’ll likely associate it with Facebook founder Mark Zuckerberg and his Oculus Quest virtual reality (VR) goggles.

In October, he announced he’d spend hundreds of billions of dollars turning Facebook into a metaverse company.

And to make it seem like he owned the idea, he renamed his company Meta Platforms (MVRS).

But Zuck is deluded…

And unlike the version of the internet we use today, Big Tech companies such as Facebook/Meta won’t have near total control.

Many of today’s popular metaverse worlds are built on blockchains…

This makes all kinds of economic activity possible in the metaverse.

Take Axie Infinity, a game that runs on the Ethereum blockchain. Its players are already earning points denominated in crypto.

Players can then cash out the “points” for other crypto or local currency.

Or take Decentraland and The Sandbox…

As I showed you, this digital land is the equivalent of domain names in the version of the internet we use today. You need it before you can set up a business in one of these worlds.

People are even earning salaries in crypto by working as avatars – or digital representations of themselves – in the metaverse.

There are jobs, for instance, in the casino that operates in Decentraland.

NFTs also play a huge role in the metaverse…

NFT stands for non-fungible token. That’s just a fancy way of saying each token is unique.

These tokens are created on a blockchain. And they verify ownership and authenticity of scarce digital goods.

Cryptos and NFTs are woven into the fabric of these worlds. This makes it easy to buy and sell all kinds of digital goods and opens up almost endless business opportunities.

This week, a company called Higher Life CBD became one of the first cannabis brands to launch a CBD dispensary in the metaverse.

You go to the store as your avatar. You buy legal cannabis there. The company then delivers what you bought to your door.

This is where the metaverse gets really exciting.

When a blockchain-based metaverse world wants to raise funds, it creates a crypto coin native to the blockchain it’s built on.

Then it sells a number of those coins to early adopters and gives them stakes in the project.

But instead of corporate executives calling the shots, like in the stock market, coin holders vote on all major decisions.

And if the project becomes popular… the value of its coins will go up and reward these early adopters.

Unlike VR, blockchains don’t have flashy visuals. So they’re not good fodder for cable news.

Folks in the mainstream press would much rather show videos of Zuck against a green screen pretending he’s in the metaverse than explain how existing metaverse worlds are being built and run.

Zuck interacting with his avatar in a green screen version of the metaverse. Source: Business Insider

But VR and the metaverse are NOT the same thing.

Here’s Matthew Ball, a Canadian venture capitalist who put out some of the first research reports on the metaverse…

If you don’t already know him, Jeff is a Silicon Valley insider and early-stage tech investor.

He’s so excited about what’s coming, in August, he launched a new advisory all about it called Unchained Profits.

The first version of the internet – Web 1.0 – took shape in the mid-1990s. Those were the days of using a dial-up modem to call up static web pages on your PC or laptop.

The rollout of smartphones and 4G internet connections about a decade ago gave way to Web 2.0.

This is the version of the internet we have today. We use it to stream and post videos… interact on social media platforms… and access the web when we’re on the move.

Blockchain tech is setting the stage for the upgrade of the internet I call Web 3.0. It’ll encompass DeFi (decentralized finance) to simplify our transactions… decentralized social media platforms… NFTs… and the metaverse.

Just like bitcoin (BTC) has done with currency, Web 3.0 will take power away from the already powerful and put it in the hands of the “little guy.”

His vision for the metaverse has none of these decentralized benefits for users. Its business model will be the same as it is now… only worse.

VR headsets allow Facebook/Meta to read your eye movements. This tells it all kinds of things about you… like where you’re paying attention and what you focus on.

Why would people devote their time to a Zuck-made metaverse world… and let him spy on them for profit… when there are alternatives that reward them for their online activities?

I’ll let Jeff wrap up on that…

Facebook/Meta is trying to claim all the virtual real estate and be the singular destination – as though there will be only one player in the metaverse.

The company has seemingly unlimited cash to throw at building its own version of the metaverse. But it won’t work. The incentives for users aren’t there.

A Web 3.0 approach to the metaverse has built-in monetary incentives for everyone. The most successful worlds will be economies in their own right. They’ll be places we visit not only to be entertained, but also to do business and make our livings.

After currency, NFTs and metaverse coins are the two most popular use cases for crypto.

And the crypto coins Decentraland and The Sandbox issued, MANA and SAND, shot higher by as much as 3,621% and 11,570%, respectively. 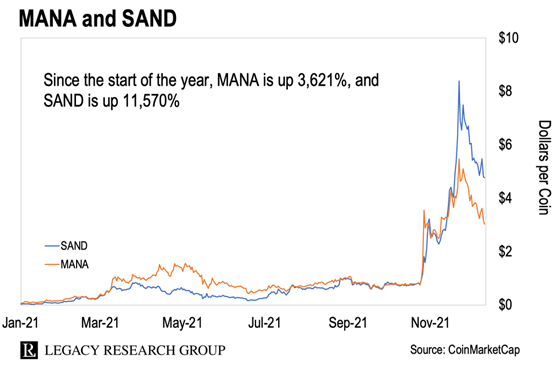 This will accelerate the “mainstreaming” of crypto… and send prices soaring.

So there’s not much time for you to get in during this earliest stage – where the most profit potential is still to come.

If you’re an Unchained Profits subscriber, you can check out Jeff’s best-in-breed recommendations here.

If you’re not a subscriber, you can buy crypto “blue chips” bitcoin and ether (ETH). Mainstream adoption is a tide that will lift all boats. And these are the two biggest and best-vetted crypto projects.

Facebook/Meta may have all the money and power now. But there’s a new contender on the block. And so far, it has all the momentum behind it.