It’s the most important chart in the world right now…

It measures the strength or weakness of the dollar versus overseas currencies. 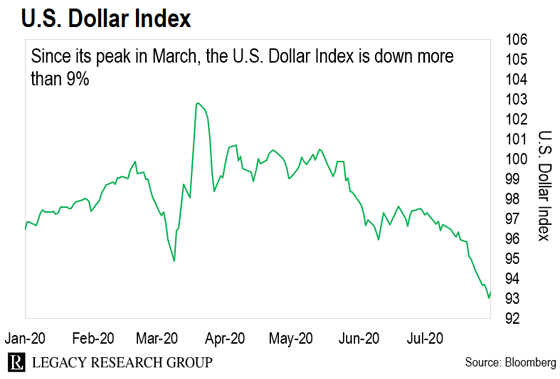 As you can see, since the coronavirus crisis started in March, the dollar is down more than 9% versus a basket of its main overseas rivals.

And as I (Chris) have been shouting from the rooftops lately, it’s not too late to make transformative profits in this crisis.

As I’ll show you today, there’s still plenty of gas in the tank for these three U.S. dollar alternatives.

Colleague Teeka Tiwari says you can still make at least 100% gains on gold… and 300% gains on bitcoin from here.

If you’re joining us for the first time, welcome…

The Daily Cut is the premium e-letter we created for paid-up Legacy Research subscribers.

It’s my job to make sure you have our best ideas for building and protecting wealth front and center on your radar.

And that mission has never been as important.

Last week, the U.S. saw its largest quarterly drop in GDP since at least 1875.

That includes the Great Depression… World War I and World War II… and the double-digit inflation of the 1970s.

Last quarter’s drop is down to the worst pandemic since 1968’s so-called Hong Kong flu (H3N2).

But there’s rarely been a better time for prudent speculators to make truly life-changing wealth.

I’ve shown you, for instance, how tiny biotech stocks could deliver gains of 1,000% or more.

And a sinking dollar is rocket fuel for these assets.

Teeka believes this is one of the most important big-picture trends in the world right now. And he’s been watching it closely for his readers.

In Wall Street jargon, the income you get on parking your money in bonds is the “real” yield.

“Real” just means you’ve taken into account the negative impact inflation has on your buying power.

You can see it in this next chart. It plots the U.S. Dollar Index against the real yield on the 10-year Treasury note. It’s the most widely held bond in the world. 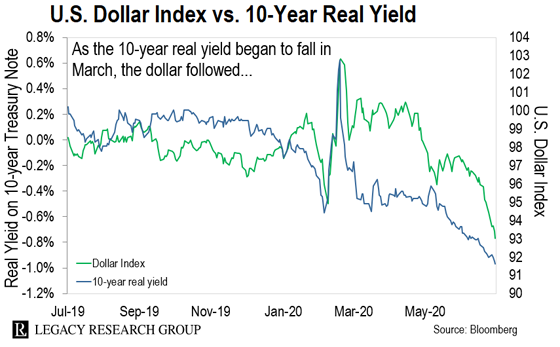 The 10-year real yield has dropped below -1%. That means you lose 1% on your investment – after inflation – every year.

This has crushed the value of the dollar versus its rivals.

And that makes sense. You now have to pay Uncle Sam to park your cash in dollar bonds.

So investors are wisely seeking alternatives that don’t carry negative rates of return.

The Fed has slashed short-term interest rates back to zero.

Without getting lost in the weeds on how it works, this “pulls down” bond yields.

And Fed chairman Jay Powell is determined to keep short-term rates on the floor. At a virtual press conference last Wednesday, he shared this gloomy outlook for the U.S. economy…

The path forward for the economy is extraordinarily uncertain and will depend in large part on our success in keeping the virus in check. […]

Even if the reopening goes well – and many, many people go back to work – it’s still going to take a fairly long time for parts of the economy that involve lots of people getting together in close proximity. […] Those people are going to need support.

It’s no wonder gold, silver, and bitcoin have been going nuts…

None of these assets pay you any income. So when bond income is plentiful, they tend to suffer.

But with negative real yields, there’s no bond income for investors to forgo anymore. And by putting their money into these zero-yielding assets, they’re sidestepping the negative yield on bonds.

That’s what’s happening in these next two charts. 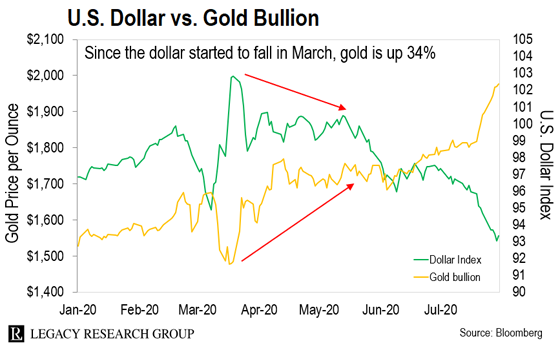 As you can see, since the dollar’s value versus its overseas rivals started to fall in March, gold is up 34%.

Bitcoin’s also made an impressive jump in U.S. dollar terms… 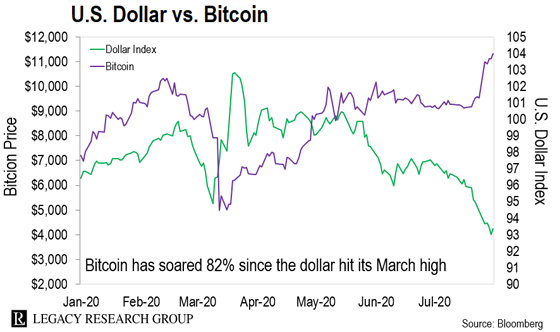 As you can see, bitcoin is up 82% versus the dollar since the dollar began to tumble in March.

If you’ve been with us for a time, you’ll know Teeka heads up our Palm Beach Research Group division.

In 2014, he made it his mission to help ordinary folks achieve extraordinary wealth using the secrets and techniques he learned over a two-decade career on Wall Street.

He’s also been banging the drum on gold…

Remember, when the Fed and other central banks turn on their printing presses and real rates go negative… investors flee paper money and bonds.

They flock to gold to protect their buying power. And then, gold surges and ignites a huge rally in gold stocks.

This unique series of events is rare. It doesn’t happen very often. But when it does, it can make you life-changing gains.

And Teeka believes gold – and bitcoin – will continue to soar.

Here’s Teeka with more on what’s ahead…

Every central bank in the world is about to dilute the value of their paper money at a scale we’ve never seen before. But they can’t devalue gold or bitcoin.

That makes them the only refuge for investors looking to shelter their wealth from the ravages of reckless money-printing.

Gold prices could easily double from these levels. And bitcoin could quadruple (or more).

Out-of-control money-printing will massacre the buying power of dollars, euros, yen, rubles, etc. So it’s imperative you hedge your buying power by owning some gold and bitcoin.

So if you haven’t already, now is a great time to pick up some gold and bitcoin.

For more on how to buy gold, catch up here. Use this one-page guide if you’re buying your first bitcoin.