If you’re a Daily Cut regular, you’ll know I’ve been spreading the word on a major shift in how we power our modern civilization.

The first was when we went from burning wood to burning coal. This happened in the late 19th century.

At the turn of the 20th century, we shifted from burning coal to oil with the birth of the automobile.

The third shift was toward nuclear power in the 1960s.

These are commonly known as lithium-ion batteries because lithium and other metals give these batteries what they need to hold a charge.

And they not only power every electric car and truck on the road. They also power drones in the air… and just about every electronic you own.

Your smart watch… your smart phone… your Roomba vacuum cleaner… your self-driving lawn mower – they all run on these batteries.

So let’s get started with this week’s mailbag edition with a question about what happens to all the batteries when they die.

Standing by with an answer is colleague and former Wall Street insider Nomi Prins.

This week, Nomi went live with her Running on Empty Summit. It’s all about the energy transition… and how you can profit.

As she’s been showing her readers, we’ll spend about $150 trillion on the energy transition. And she’s recommended stocks to her readers that are helping make it happen.

But as you’ll see from the question below, not everyone is convinced this shift is a good idea…

Reader question: What will we do with the lithium and other battery metals when EV batteries die? They have to go somewhere.

Are there companies to handle this? Can we recycle these waste materials rather than dumping them and causing more pollution?

Nomi’s response: Hi, Bettie. Thank you for writing in. I agree. No matter the power source, we need a recycling solution.

There’s still no federal policy for dealing with old batteries. But statewide groups have recognized the battery-metal recycling issue you bring up.

The group issued a report this year. It showcased two main ideas…

The other ideas is the carmaker should be responsible for recycling the batteries in the cars they make.

Importantly, these solutions would come at no cost to the car owner.

There are a growing number of firms that handle battery recycling. Li-Cycle (LICY) in Ontario, Canada, is one that comes to mind.

The company uses a special process to break down batteries without the risk of fire or explosion. This leaves it with two main product lines – battery materials and mixed copper and aluminum. Then it sends these raw materials back into the battery supply chain.

There’s also Retriev Technologies in California. It also does battery recycling. But it isn’t publicly traded. That makes it hard for regular investors to buy shares.

I’m not recommending either of these companies as investments right now. I just wanted to show you there are companies addressing this need.

My team and I are doing a lot of research into how to play this growing need. And I just recommended a company in my Distortion Report advisory that addresses your concern in a different way.

It makes a type of battery that lasts longer than regular lithium-ion batteries. And its components are non-toxic. So it’s easier to recycle.

I write a lot about EV charging and batteries there. It all falls under my New Energy investment theme. You can read more about that here.

Next up, a question about crypto regulation for colleague Teeka Tiwari.

The feds claim the Lazarus Group, a North Korean government-affiliated hacker group, had laundered over $400 million in crypto through Tornado Cash.

And the clampdown has some Teeka Tiwari readers worried.

Reader question: Teeka, will you comment on the upcoming cryptocurrency regulations?

Reader question: There’s a lot of talk about institutional money coming into the crypto space, but not until there are regulations in place.

Teeka, what are your thoughts on this?

Teeka’s response: Hi, Michael and Dan. Thanks for writing in about this. There’s a lot of fear in the crypto market right now. And after the U.S. Treasury Department sanctioned Tornado Cash, a lot of people are panicking over the prospect of outright government crypto bans in the U.S.

Now, before you freak out, it’s not going to happen. I’ll get to why in a moment. First, a quick catch up on what Tornado Cash is…. and why it’s so controversial.

Tornado Cash is what’s known as a mixer. Without getting lost in the weeds, you send your crypto to the mixer… it mixes it with other payments to obscure its origin… then sends it to the payee’s address. That means you can anonymously send cryptocurrency payments.

The government says you’d only need to do that if you want to launder money, funnel money to terrorists, buy drugs, or be a bad guy in some other way.

And while it’s true that bad actors use mixers to hide their identities… there are also people using mixers to donate money to Ukraine.

Vladimir Putin is locking people up for even calling Russia’s actions in Ukraine a “war.” So if you’re in Russia, it’s reasonable to want to hide your identity.

People also use mixers to send funds to places where governments have banned payments from overseas. In many cases, if these folks can’t get payments from relatives abroad, they’ll starve. So there’s a real need for this technology.

Cash is completely anonymous. You can go to a store, use cash to buy something, and nobody can track it. Why can’t we have that same level of freedom with our crypto transactions?

As for my thoughts on the government crypto regulations…

The U.S. government has already said it’s leaving bitcoin (BTC) and Ethereum alone. It knows how many U.S. citizens own these assets. Doing something like that would slam the price of bitcoin and Ethereum…and torch tens of millions of votes.

The ownership base of bitcoin and Ethereum is too spread out across different socioeconomic groups and different political power bases. It’s politically untenable for the U.S. government to make a move like that against these popular crypto assets.

But I don’t think everybody’s thought that through, which is why there’s still some weakness in bitcoin and Ethereum.

To wrap up, a question for colleague Jeff Brown.

As longtime readers will recall, Jeff reported back to his readers on a visit he made to a bleeding-edge precision medicine facility in La Jolla, California.

It evaluates you from head to toe and compares that to a whole genome sequence. It’s an analysis of all 3.2 billion base pairs of your DNA.

This gives us unprecedented insights into our risk of getting certain diseases, what kind of medications we will respond well to, and even medications that would have adverse effects on us due to our genetics. 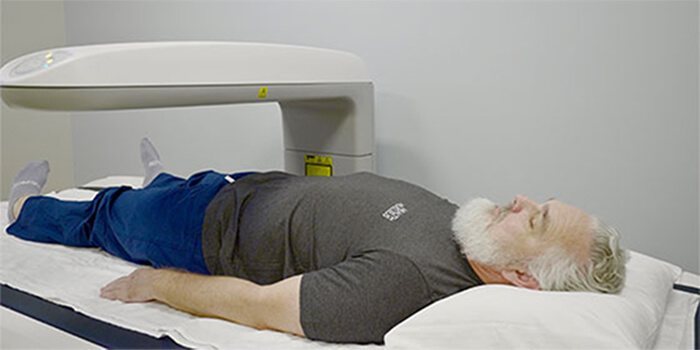 Reader question: My son may have colon cancer. He is 45 with a wife and five great kids. You went to a special facility some time back and wrote about your experience. I remember you reporting you found early signs of prostate cancer.

I want to send my son there when his doctor clears him. I want him to get checked very closely! What’s the name of the health facility you went to and wrote about?

Jeff’s response: Hi, Bill. I’m so glad you wrote in to ask about this. It’s a subject close to my heart.

My mother died far too young from colon cancer. And you have a much higher chance of surviving this type of cancer if you detect it early.

Even though I’m in my early 50s and in good health overall, I’ve been having a colonoscopy once every five years for the last two decades. I wish your son the best as he goes through this experience.

I’ve previously written several times about my visits to the Health Nucleus. It’s the company in La Jolla, California, that hosts the world’s leading center for preventative medicine. It recently rebranded as Human Longevity.

Initially, my interest was academic. But the doctors at Human Longevity did a barrage of tests – including bloodwork, a full-body MRI, a CT scan, an echocardiogram, an electrocardiogram (“EKG”), and a bone density scan. And after these tests, the doctors told me I had prostate cancer.

The good news was we caught it early… and at my follow-up appointment in 2021, I learned my treatment plan was working.

Even better, in my most recent checkup this year, I saw continued progress.

And with the support of the team at Human Longevity, I’ve been able to make this progress without surgery. I made some major changes in my diet, fitness, therapy, and supplements, which have reduced the size of the cancerous tissue.

That’s the power of preventative medicine. We don’t have to wait until something goes wrong and it’s too late for a cure. We can take action to catch and fix problems early. It’s a proactive approach. That’s a big shift from the reactive healthcare system many of us are used to.

The program I’m enrolled in is called the 100+ program. You can reach out on Human Longevity’s website and register your interest. Feel free to tell them Jeff Brown sent you. They’ll treat you very well.

I’m a customer, just like anyone else. I don’t get any special treatment or discounts. And have no formal business relationship with the folks at Human Longevity. I just believe in what they’re doing.

I’ve also heard from many of my subscribers who have benefited from these diagnostics. In some cases, their visits saved their lives. Hearing stories like those is all the reward I need for the work I do.

Best wishes for the health of you and your family. What you’ll learn will be humbling. It takes sacrifices and effort to improve our health. But as always, information is empowering. And this is especially true of preventative medicine. If we use it right, it can give us a new lease on life.

Thanks to the team at Human Longevity, I haven’t felt this fit and energetic for 20 years.

That’s it for this week.

We love to hear your thoughts, comments, and ideas.

Join the conversation by writing us at [email protected].