Apple (AAPL) CEO Tim Cook and Facebook (FB) CEO Mark Zuckerberg have been at each other’s throats for years.

In a 2014 interview on PBS, Cook warned about tech companies whose business model is to collect, package, and sell your data to the highest bidder so they can target ads at you.

He didn’t name Facebook specifically. But he urged folks worried about their smartphone and tablet apps spying on them to “follow the money” to figure out which companies aren’t trustworthy.

Then, in 2018, MSNBC and Recode interviewers asked Cook what he would do about the Cambridge Analytica data scandal if he ran Facebook. As you may recall, in 2016, Facebook allowed a third-party app to harvest the personal data of 87 million Facebook users, without their permission, to sell to political campaigns.

He responded that he “wouldn’t be in this situation.”

Zuckerberg didn’t take this in stride. The Wall Street Journal reported that he has privately told staff members that Facebook should “inflict pain” on Apple to retaliate.

But this week, it was Apple, not Facebook, that landed the first punch. And it was a haymaker.

In the latest release of its iOS iPhone operating system, Apple gives users an easy way to stop apps from tracking them.

As I (Chris Lowe) will show you in today’s dispatch, it’s a bruising blow to Facebook and other for-profit surveillance companies. It’s also a potent weapon you can use to halt Silicon Valley’s data harvesters from spying on you.

The Daily Cut is the premium e-letter we created for paid-up Legacy Research subscribers in August 2018.

Our mission is to pass on their big ideas about how to really move the needle on your wealth. That’s why I spill so much digital ink on cryptocurrencies, pre-IPO shares, bleeding-edge technology stocks, and the commodities boom.

But a founding principle of this e-letter is there’s no point in having money if you don’t live in a free society you can enjoy it in.

Wealth itself is useless. It’s useful only insomuch as it gives you the freedom to live the life you want.

That’s why a big theme over the years here at the Cut has been the rise of digital surveillance. I’ve been on a mission to alert as many people as possible about what’s going on… and the threat it poses to their freedom.

Governments use surveillance to suppress dissent…

Traditionally, they used human intelligence gatherers to snoop on us.

The more authoritarian the government… the more snoops they employed.

The Nazis had the Gestapo. The Soviets had the KGB. Communist East Germany had the Stasi.

They personally monitored and tracked “suspect” citizens. Sometimes they also bugged people’s apartments… and their telephones.

But keeping tabs on millions of people was extremely labor-intensive.

In 1944 – one year before the end of World War II – there were about 16,000 active Gestapo officers policing a population of about 66 million Germans.

That’s about one agent for every 4,100 Germans. For the U.S. government to achieve that level of surveillance today, we’re talking an army of 80,000 intelligence officers. That’s roughly four times the estimated number of agents the CIA employs.

But now, a potent blend of Big Tech social media and data harvesting has slashed the costs of mass surveillance. This frees up governments to snoop even more.

Take it from our cofounder, Bill Bonner…

If you think spooks don’t access your data, I have a bridge to sell you…

In 2013, National Security Agency (NSA) whistleblower Edward Snowden revealed there has been a thin… and often porous… membrane between Silicon Valley tech firms… and the alphabet soup of spy agencies in and around Washington D.C.

The NSA is charged with SIGINT. That’s spook-speak for signals intelligence – the task of monitoring communications and information systems.

The NSA was supposed to listen to only foreign communications traffic. But the NSA program Snowden blew the whistle on, codenamed PRISM, was secretly monitoring Americans’ internet communications.

That program faded from the headlines. But do you really think the nation’s spooks would suddenly allow themselves to be blind to what’s happening online?

These days, almost everyone has a smartphone they take with them everywhere.

We know these devices are tracking everything we do online or through apps – even our physical location – and pinging data back to Big Tech firms like Facebook and Google. But most of us go along with it for the convenience.

Using the data these platforms send back to it, Facebook can track where you are… what apps you have installed on your smartphone… when you use them… and what you use them for.

It can also access your webcam, microphone, contacts, emails, and calendar. It knows your call history, the messages you send and receive, the files you download, and the games you play.

It sees your photos and videos, your music, and just about every move you make online.

And it doesn’t do this on only Facebook platforms. It aggregates that data with data from non-Facebook apps. Facebook pays these other app companies to spy on us for it… and send back all the data they can gather.

Once you update your iPhone to the new iOS 14.5 operating system, every company that wants to track you through apps and websites has to first ask permission.

A pop-up from Apple will ask you if you’re okay with that app tracking you. If you say no, its data feed goes dark. 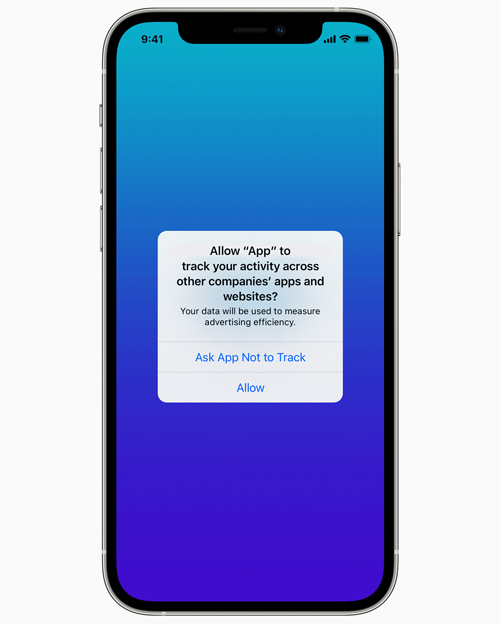 Here’s our tech expert, Jeff Brown, with more on why Apple’s move is so important…

Most of us have no idea about the extent of the digital surveillance going on. But these egregious violations of our privacy are the foundations on which Facebook and Google are built. Nearly all of their revenues come from spying on their users.

So the iOS update is wonderful news for those of us who use iPhones. And it’s terrible news for data harvesters such as Facebook and their customers in the advertising world. What’s not to like?

But what about the roughly 8 out of 10 smartphone users worldwide who opt for Android operating systems?

And given that Google – one of the worst-offending Big Tech surveillance firms – owns Android… it’s unlikely this feature will come anytime soon.

A new study out of my alma mater, Trinity College Dublin, shows how stark the contrast is.

iPhones and Android phones send data back to Apple and Google every four and a half minutes. This happens all day, every day – even when we’re sleeping and our phones are idle.

Over a 12-hour period, the iPhone sends about 52 kilobytes’ (KB) worth of data back to Apple. This includes telemetry (instrument data readings) and location data. 52 KB isn’t much at all – just a sliver of information.

But Android phones send about 1 megabyte’s (MB) worth of data back to Google over the same time period.

That means Google collects about 20 times more data than Apple does. That includes data from Facebook apps… and third-party apps that send your data back to Facebook.

What we have here is cold, hard proof that Google’s Android operating system is highly invasive.

I’ve said this before. And I’m sure I’ll say it again… Readers who are concerned about privacy should choose the iPhone.

Most iPhones are pricier than most Android phones. But you can cut the cost by buying an older iPhone model from Apple… or a secondhand iPhone.

Apple isn’t perfect. But it’s speaking out against the data harvesting model… and allowing its customers to opt out of 24/7 digital surveillance.

One way to think of the extra cost of buying an iPhone is as the price of privacy.

I’ve long been an iPhone guy. But after listening to Jeff, there’s no chance I’ll switch to Android… no matter how much it saves me.