Welcome to our weekly mailbag edition of The Daily Cut.

Today, our tech investing expert, Jeff Brown, tackles a worried reader’s question about the Big Tech devices we bring into our homes… and their capacity to spy on us.

Gold bull Tom Dyson weighs in on what the future holds for gold stocks.

And Legacy cofounder Bill Bonner marks the passing of notorious conman Bernie Madoff… and upsets some of his readers in the process.

But first, that question about Big Tech surveillance for Jeff…

Reader question: Why are you so excited about the new Amazon (AMZN) robot technology that you want to place in your house?

On one end, you are worried about security and don’t recommend using Google (GOOG), Microsoft (MSFT), or Amazon. On the other, you’re inviting this technology into your house.

Jeff’s response: Hi, Kathryn. Thanks for sending in this question.

I wrote recently about Amazon’s planned home robot, codenamed Vesta. With the help of Amazon’s AI (artificial intelligence) assistant, Alexa, Vesta will carry objects, play audio, and integrate with other devices such as Ring security systems and Echo home speakers.

But you bring up a valid concern. We don’t want to bring into our homes technology that will monitor us to sell our data… or worse.

But there’s a difference between Amazon… and Facebook (FB) and Google.

As I’ve written before, Facebook, Google, and others like them aren’t good stewards of our data. Their business model is built on advertising. They earn money by giving advertisers access to profiles built from our data.

I deleted my Facebook account more than eight years ago when I grasped how it was monetizing my personal data at my expense – and great risk.

And when I tested out Google’s Nest Hub smart home system after its launch, I could see the impact of its data-focused business. Before I’d be able to use it, Nest wanted me to give Google complete access to all of my data. The software blocked me at every turn when I tried to do something as simple as join a Google Meet call.

Amazon and Apple (AAPL) are much better custodians of our data because their businesses are not primarily based on advertising.

Apple’s business is not based on advertising at all. It sells products and services unrelated to advertising. The company isn’t perfect. But I would choose it over Google and Facebook any day.

Amazon is similar. Its smart home products are seamless and deliver great value. They set up quickly. And most critically, they don’t require us to share all our contact information, the contents of our file folders, our photos, and our email inboxes.

Rather than demanding access to all our data, Amazon conveniently delivers the products people want.

Next up, a question for the guy I call the Indiana Jones of Legacy, Dave Forest.

A trained geologist, he spends his time crisscrossing the world looking for buried treasures.

He even looks the part. Here’s a shot of Dave in Nevada, examining the rocks in an area the NASA GOLD satellite system indicated was positive for copper and gold. 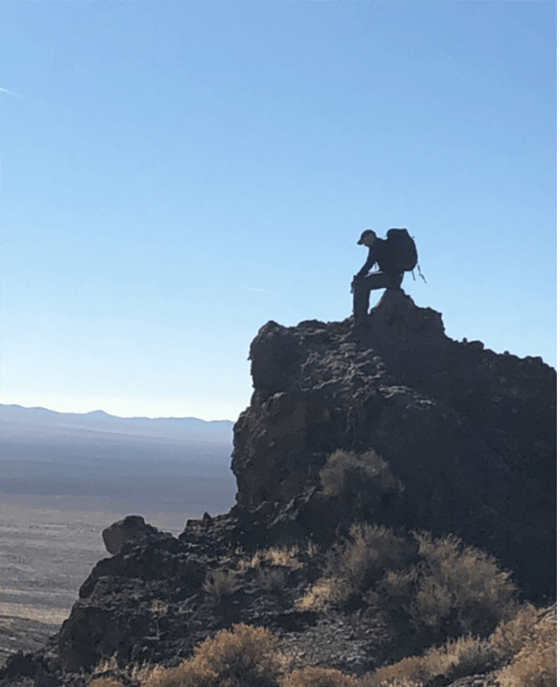 He also gave his Strategic Investor subscribers the chance at gains of 98%… 128%… and 284% on tech-metal mining stocks.

And in February, Dave gave his International Speculator subscribers the chance at a 1,019% gain on a rare earths mining stock, Rare Element Resources (REEMF).

It mines for rare earth elements in Wyoming.

I’ve been writing about this market megatrend for years now. But if you’re new to the conversation, I’ll catch you up…

Rare earth elements (REEs) are a set of 17 silvery-white metals.

The Japanese call them “the seeds of technology.” The U.S. Department of Energy calls them “technology metals.”

That’s because they’re irreplaceable ingredients in a range of bleeding-edge tech thanks to their unique magnetic, phosphorescent, and catalytic properties.

Without them, electric vehicles, 5G networks, and wind turbines wouldn’t be possible.

Reader question: A question for the brilliant David Forest. I have wanted to buy Rare Element Resources. But being politically aware, I have thought Biden would NOT permit any mining in Yellowstone National Park.

It looks as though his administration is looking to Australia for such. Whereas red-blooded American Donald Trump would come to an American YES on this needed opportunity in the Bear Lodge area [in Wyoming, where REEMF’s mine is located]. Do you think it’s still a viable option under Biden?

Dave’s response: Good question, Cyndi. Many in the mining industry – including me – are waiting to see the answer from President Biden.

He claims to be a booster of clean energy. But that’s an easy thing to say. What’s harder is to permit the mining of tech metals critical to building this new energy infrastructure.

Everyone loves talking about these ideas. But when it comes time to swing the wrench, there will be a lot of shouting about the impacts of the “evil” mining industry.

The alternative is to rely on our “allies,” such as China, for supply of critical metals. Big metals users such as Tesla (TSLA) know this isn’t a viable long-term option given the deteriorating relationship between the U.S. and China… and how COVID-19 has hurt the global trade environment. That’s why they’re doing deals on as many mines as they can find.

Will Biden back mining of tech metals in America? I suspect he’ll waffle hard. In places where anyone puts up a stink, he may back down. We’re seeing that today with proposed copper mines in Minnesota and Arizona.

The good news is Wyoming is a very mining-friendly state. It’s also important to note Rare Element’s Bear Lodge project isn’t within Yellowstone or any other protected area. It’s 300 miles to the east.

This is a relatively remote corner of America, which should help.

The project will have to go through permitting with the federal government. But with support from Wyoming state lawmakers and the Department of Energy, which are funding Bear Lodge’s development… this could well be one Biden lets through.

He may even make it a cornerstone example of his support for tech metals. It’s about as politically palatable as any mining project you can find in the U.S., outside of mainstay locales such as Nevada.

I’m willing to hold and see this process unfold. I agree with you: Biden’s stance on mining is a big issue to watch.

Next up, a question on gold.

As we covered in detail here this week, gold is up a meager amount since this time last year – currently just 2.4%. That’s despite unprecedented government and central bank stimulus… typically bullish conditions for gold.

As regular readers know, in 2018, Tom made a $1 million bet – most of his life savings – on gold. And he continues to believe it’s the best way to preserve his wealth in the catastrophe he sees coming for the dollar and other government currencies.

Tom says gold will find its true value when the stock market finally turns bearish… like what happened after the 2008 crash. And one of Tom’s readers wonders what that will mean for gold stocks…

Reader question: When the stock market bubble bursts, will gold stocks and ETFs [exchange-traded funds] get thrown out as well?

If so, will gold stocks recover sooner than the rest of the stock market or at or about the same time?

Tom’s response: Gold stocks are vulnerable to stock market crashes. These stocks are speculative by nature. When liquidity evaporates in a crash, they can fall quickly… even as gold rises.

Two things to say about this…

First, I think we’re entering a period of stagflation – economic stagnation combined with inflation. We haven’t seen something like this in 45 years. It should support gold stocks over the long term.

The feds will do whatever it takes to prop up the stock market, the bond market, and asset prices (including foreign assets) in general.

In their eyes, this strategy worked beautifully in 2008 and in 2020. They’ll use it yet again, with even more conviction, the next time there’s a panic in financial markets.

This means any drawdowns in the stock market – if there are any – will be brief.

Second, there is one caveat. If either inflation is rising or the dollar is losing value, it’ll restrict the feds’ ability to use stimulus. But we’re not there yet…

If there’s a major sell-off in the mining sector, I’ll take the opportunity to accumulate stock in my favorite mining companies in anticipation of much larger gains ahead.

We’ll wrap up with feedback from readers of Bill Bonner’s Diary.

In last Friday’s Diary, Legacy cofounder Bill Bonner reflected on the passing of one of America’s most notorious conmen, Bernie Madoff.

Madoff masterminded a Ponzi scheme worth about $64.8 billion – the biggest in history.

Bernie Madoff was no saint. But he never forced anyone to give him money… never counterfeited money to pay his creditors, never tried to debase his clients’ money, and never falsified the whole financial world to keep his scam going.

And he never caused a horrible inflation that will plague the whole nation, even innocent bystanders who never heard of him.

This outraged some readers…

While the U.S. government has its flaws, Bernie Madoff was a self-serving conman and a criminal. The comparison may seem a clever way to take a swipe at government excess, but it is distasteful to diminish Madoff’s crimes in the process.

But others found the comparison apt… even amusing…

Bill was only remiss in attempting to compare unequal crooks. Bernie’s crime – although massive – is minuscule compared to the profligacy and corruption unfolding in D.C. The entire world will be a victim of the crime.

My reaction to reading Bill’s missive on Bernie Madoff was a wonderful belly laugh. Bill’s comparison of the destruction of our country’s economy, financial status, and viability to what Madoff almost accomplished would award Madoff a halo in comparison.

Yes, our government is like Madoff. But it’s 411x worse! That’s the difference between Madoff’s $68 billion heist and our government’s $28 trillion deficit.

Bill’s continued analysis of the absurdity of what our government does is worth every word. His writing should seriously prepare any Americans who want to preserve their wealth.

Remember, if you have a question or comment for anyone on the Legacy team, be sure to send it to [email protected].