Imagine waking up with half your wealth gone…

That’s what happened to investors in Argentine stocks when they got out of bed yesterday morning.

News broke yesterday that the country’s market friendly president, Mauricio Macri, is on his way out.

Following this political shock, Argentine stocks fell off a cliff. 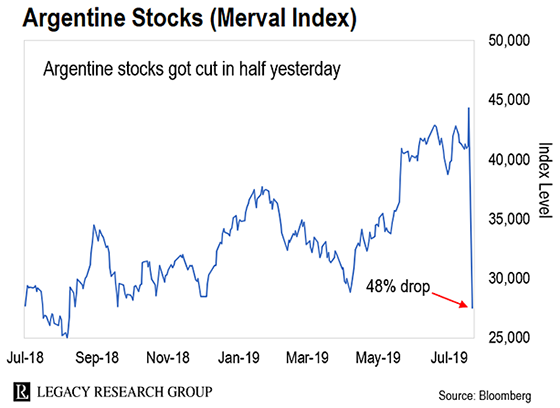 Going back to 1950, that’s the second-biggest one-day rout of the 94 global stock market indexes Bloomberg tracks.

The only time a stock index fell more in a single day was in Sri Lanka in June 1989. In the middle of a bloody civil war, it lost 60% of its value in a day.

Maybe if the trade war gets sorted out, the bull market has some more miles in the tank still.

But we’re still urging caution… especially if you are heavily invested in U.S. stocks right now.

Our regular stand-in for the U.S. stock market is the S&P 500. And the average bear market loss for the index is 30%.

And with the risk of a recession on the rise… our base case scenario is for U.S. stocks to enter a bear market within the next 12 months.

As we’ll show you today, that recession will likely be global…

That means taking active measures now to shore up your wealth… before it’s too late.

We’ll get to what to do in a moment. First, let’s look at the signs that point to a global recession… and why it matters to you today.

Europe’s economic engine is already on the brink…

Germany is also the world’s third-largest exporter after China and the U.S. That makes it a canary in the coal mine for global trade.

And after a decade of near-uninterrupted growth… German exports are shrinking. They were down 8% year over year in June.

Figures from June also reveal that German industrial production suffered its biggest annual fall in nine years… since the aftermath of the Great Recession. 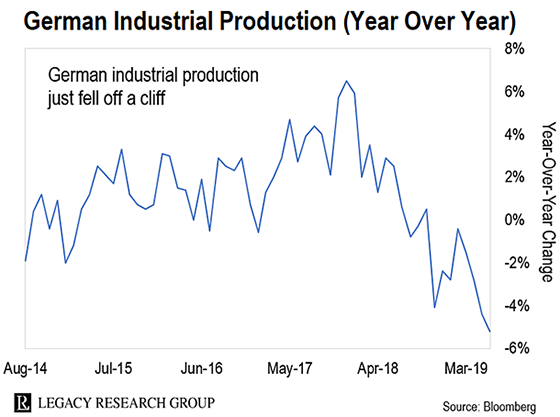 And preliminary figures show the German economy shrank in the second quarter of this year.

But Germany is just the canary in the coal mine…

Even mainstream analysts at Morgan Stanley grasp that the slowdown in exports is not just a German problem.

They warned in a recent research note that the rest of the world is not far behind.

If the trade situation worsens, they say, “we would see the global economy entering recession in three quarters.”

In other words, by midway through next year.

Even the Fed knows the jig is up…

In the last published minutes of the Federal Reserve’s rate-setting committee meeting in January, it used the words “risk” and “uncertainty” 48 times.

And it was only a 21-page document.

You’ve got a popular revolt in Hong Kong… tensions rising between nuclear-armed rivals India and Pakistan over Kashmir… Kim Jong-un testing more missiles… oil tanker seizures by Iran in the Strait of Hormuz… and the U.S.-China trade war.

It’s why we’re seeing a rush into safe havens…

Remember, recessions and bear markets are the “terrible twins.” They tend to happen together.

Since 1926, there have been eight bear markets in the U.S. They’ve lasted between six months to nearly three years. And they’ve sent the S&P 500 plunging between 89% and 22%.

Of these eight bear markets, five coincided with economic recessions.

And most notable among them are the two most severe bear markets in history – the 1929-32 bear market and the 2007-09 bear market. 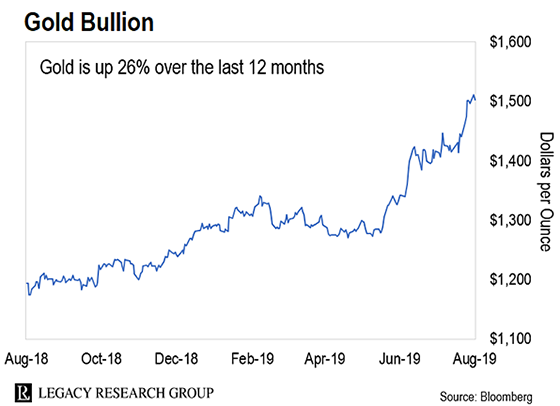 As we’ve been showing you, gold helps protect your downside in a bear market on Wall Street.

But it isn’t the only traditional safe haven in rally mode. So are long-term Treasury bonds.

As you can see below, long-term Treasurys have been shooting up in price as investors pile in. 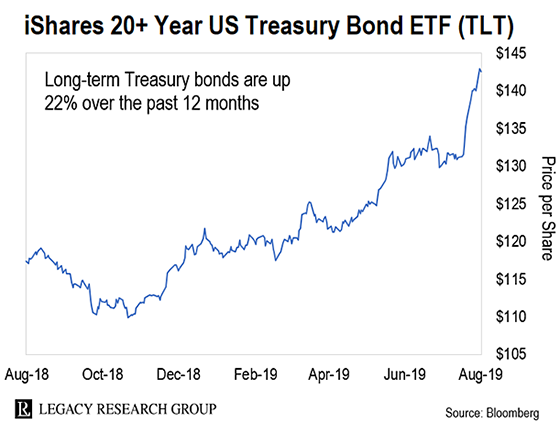 The iShares 20+ Year Treasury Bond ETF (TLT) tracks Treasury bonds with maturities of 20 years or more. And it’s up 22% year to date.

As Amber Mason – our publisher here at Legacy Research – warned the team yesterday, this isn’t normal.

These are “wheels off the bus” moves. People are scared. So they’re flocking to the relative safety of gold and Treasury bonds.

This is NOT a reason to panic…

But it is a reason to prepare.

In a global recession and bear market, you’re going to want to up the amount of wealth you have in cash and gold.

And if you haven’t already, I urge you to catch up on our recent dispatches (here and here) on the importance of asset allocation.

Long story short, you want to have your wealth distributed across different baskets.

How much should you have in each basket?

That’s up to you. But here’s colleague Teeka Tiwari on the advice he gives our paid-up Palm Beach Letter readers…

I recommend my readers keep at least 5% of their wealth in what I call “chaos hedges.” These are not investments. They’re assets you own as part of your overall portfolio mix to protect your downside in turbulent times.

Gold is one of the best chaos hedges. It tends to go up along with panic levels in the market. That panic could be anything from an implosion of the world’s financial system… a stock market nosedive… even a war.

I also recommend my readers hold up to 10% of their wealth in U.S. dollar cash… or whatever their home currency is.

Holding cash is often seen as a purely defensive play. But Teeka says there’s more to it than that…

Cash is a great way to shield your wealth from falling stocks. But cash also allows you to pick quality stocks selling at a bargain in a stock market panic.

Plus, cash allows you to pull the trigger on the perfect investment property… or a lucrative business opportunity you discover.

Whatever it is, cash typically “meets the need” better than anything else. So it’s crucial to hold some… along with gold. And that’s especially in the late stages of a bull market.

Tomorrow, another important reason to hold gold and cash. As you’ll see, it has to do with a return to the gold standard.

And for that, we’ll turn to Jim Rickards – one of the world’s top experts on the modern money system. Stay tuned.