Jeff Clark nailed his recent bitcoin trade… It’s all down to what he calls the “rubber band effect”… In the mailbag: “I threw my Amazon Echo in the trash”…

As we told you about here, in February, master trader Jeff Clark made a bold call.

After a long and painful bear market, Jeff said bitcoin was about to rally.

And that’s exactly what happened next. 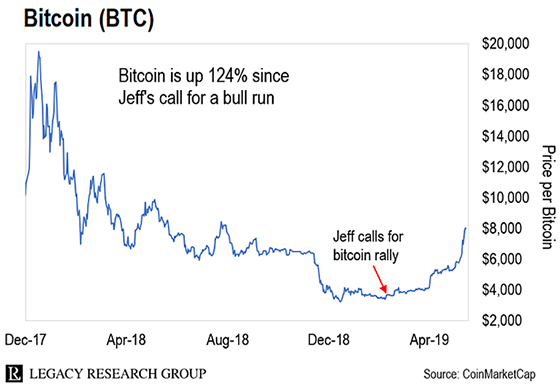 Since Jeff made his call, bitcoin has more than doubled.

And as you’ll learn in today’s dispatch… it’s all down to a simple insight on how markets move over the short term.

You may recall bitcoin was getting shellacked at the time.

On the day Jeff made his call, bitcoin was down 84% from its December 2017 all-time high.

And folks in the mainstream media… and around the web… were asking if the world’s first cryptocurrency even had a future.

Here are some of the doom-and-gloom headlines from around that time:

That’s not an easy tide to swim against…

But Jeff doesn’t pay much attention to bitcoin news.

This may rub some people the wrong way… But Jeff isn’t even a crypto guy.

He doesn’t own any bitcoin. He’s not a “techie.” And he doesn’t follow new developments in the crypto market.

Instead, Jeff focuses on what Wall Street types call “technical analysis.” He identifies trading opportunities in price trends and patterns he sees on charts.

They all behave the same way.

Over the short term, every financial asset moves based on investor emotions. So, when investors get really scared… or they get really greedy… the charts look the exact same way. It doesn’t matter whether we’re talking about bitcoin… or stocks… or oil… or coffee… or soybeans. That investment’s price chart will show all the emotion that exists around whatever asset you’re looking at.

That’s why being able to read emotion is so important.

His favorite way to describe the way stocks move over the short term is to compare them with a rubber band.

If you stretch the rubber band too far in one direction… it snaps back.

That’s how Jeff trades stocks. He looks for extremes when the rubber band is as stretched as possible. Then he bets on prices snapping back.

Here he is with more on how that works…

You can tell when a rubber band is stretched close to the limit. The rubber at the center of the band stretches thin. Its color fades. It even starts to vibrate just a bit. Then it snaps back.

The same goes for stocks and other assets. TV’s talking heads all pile onto the same side. Prices go too far in one direction. And the technical indicators I keep an eye on tell me when we’ve hit an extreme. That’s when prices typically snap back.

Going back to bitcoin, in February, the rubber band got stretched too far to the downside. Investors were overreacting to bad news. So, Jeff knew the snapback would be to the upside.

Now, Jeff’s making another call… this time about the U.S. stock market. And the opposite is true.

After a 10-year bull market on Wall Street, the rubber band has stretched too far to the upside. Investors are overreacting to good news. So the snapback will be to the downside.

When that happens, Jeff says it will be a doozy…

As we’ve been telling you about in these pages, Jeff believes the 10-year bull market in U.S. stocks is on its last legs.

And he believes a new bear market is on its way – one that could be worse than 2008.

And on May 22, he’ll reveal the exact date he believes stocks could plummet.

I’ll be tuning into Jeff’s event. I hope you can make it, too.

In short, he’s one of the best forecasters out there. If he’s worried about the end of the bull market, it pays to listen.

But Jeff doesn’t just make forecasts… He profits from them. And next week, he’ll be pulling back the curtain on a strategy you can use to make consistent gains as the bull gives way to the bear.

In the mailbag: “I threw my Amazon Echo in the trash”…

On Tuesday, we showed you how Amazon’s virtual assistant, Alexa, has been recording your private conversation through the company’s “smart speaker,” the Echo.

And in return, we got one of our favorite pieces of feedback so far…

Midway through reading your essay on Alexa, I got up, unplugged the virtually useless, but insidious device I got for Christmas and threw it in the trash. But not before leaving one final message for the Oedipal obsessed fornicators at Amazon to commit a certain biologically impossible act (for most) on themselves.

Interesting to see if my message will trigger an AI response that will change the weekly message I get listing inane questions to ask the device. Thank you for pointing out one of its principle functions is to spy and invade my privacy.

And it’s not just Mike who’s creeped out by an Amazon product. Another reader wrote in about the Amazon-owned doorbell security camera system, Ring…

I had to scroll through Ring doorbell videos looking for something and I heard as clear as a bell my Ring doorbell recording of my indoor conversation. It recorded it from outside and it was loud. Prior to Amazon owning it, it was hard to hear video audio in the past.

I warn people to be careful inside and out. I never did hook up my Alexa or my Google thing. Both are in the box and will never be used. The Ring is there until I find another version that works.

Have you had any creepy run-ins with your Echo or with Ring? We’d love to hear from you.

As always, write us at [email protected].

Here’s that link again to listen to the recordings Alexa has made in your home. You need to log in to your Amazon account for it to work.

P.S. Jeff is not the only trader here at Legacy Research with a track record of making readers money. Jason Bodner heads up our Palm Beach Trader advisory. And today, he sent out an alert to his paid-up subscribers to sell half their position in Paycom Software (PAYC).

Paycom is a human resource and payroll company. And it’s the second double Jason’s readers have had the chance to book since we launched Palm Beach Trader last June. If you profited from these trades, congratulations. We’d love to hear about it at [email protected].

2019 may be the year this tired old bull ends. For investors, it could be catastrophic. But for traders? It’s a whole different story…

On Wednesday, May 22 at 8 p.m. ET, master trader Jeff Clark will reveal the specific day he believes the market will crash.

And he’ll pull back the curtain on the strategy he used to make triple-digit gains in the darkest days of 2008 – over and over. Don’t wait. Reserve your spot now. 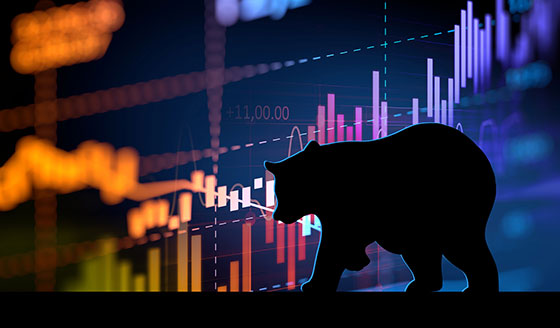